LaMarcus Aldridge had 21 points and the Portland Trail Blazers routed San Antonio 137-97 on Tuesday while the Spurs rested Tim Duncan and Tony Parker. 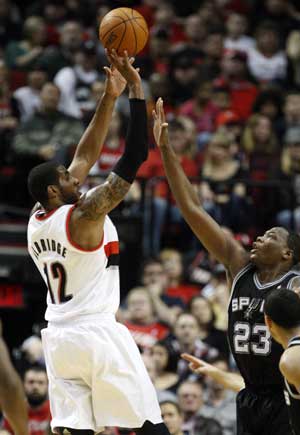 LaMarcus Aldridge had 21 points and the Portland Trail Blazers routed San Antonio 137-97 on Tuesday while the Spurs rested Tim Duncan and Tony Parker.

Jamal Crawford scored 20 points, shooting 5 for 7 on 3-pointers, and had eight assists for the Blazers, who led by as many as 48 points and sat all of their starters for most of the fourth quarter. Gerald Wallace and Nicolas Batum each had 19 points.

Kawhi Leonard had 24 points and 10 rebounds to lead San Antonio, which snapped an 11-game winning streak overall and an eight-game streak on the road.

Spurs coach Gregg Popovich said before the game that he was resting Parker and Duncan because the Spurs were playing three games in four nights. Parker is averaging 19.5 points per game, while Duncan's averaging 19.9 points and 8.6 rebounds.

Comments
Topics mentioned in this article
NBA Tony Parker DeJuan Blair Tim Duncan
Get the latest Cricket news, check out the India cricket schedule, Cricket live score . Like us on Facebook or follow us on Twitter for more sports updates. You can also download the NDTV Cricket app for Android or iOS.