The New York Knicks bounced back from consecutive losses by dominating the final period against San Antonio on Thursday, winning 100-83 to end the Spurs' seven-game NBA winning streak. 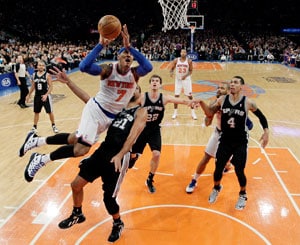 The New York Knicks bounced back from consecutive losses by dominating the final period against San Antonio on Thursday, winning 100-83 to end the Spurs' seven-game NBA winning streak.

Carmelo Anthony scored 23 points and J.R. Smith added 20 for New York. Smith highlighted his outing with an acrobatic dunk in the fourth quarter, off a pass from reserve point guard Pablo Prigioni, who had one of his most complete games since coming to the NBA at age 35.

In Thursday's other game, the Minnesota Timberwolves inflicted a rare home defeat on the Denver Nuggets, winning 101-97.

San Antonio, playing back-to-back, may have run out of steam in the fourth quarter. Tim Duncan and Tony Parker each had just 11 points for the Spurs, who lost Stephen Jackson to an unusual injury.

Jackson played just three minutes off the bench before spraining his right ankle when he fell into a waitress working the sideline in front of New York mayor Michael Bloomberg.

In Denver, J.J. Barea scored 12 of his 17 points in the fourth quarter to steer Minnesota past Denver.

The Timberwolves too were playing for the second straight night, but fatigue hardly appeared to be a factor. Instead it was Denver which looked lethargic two days after snapping the Los Angeles Clippers' 17-game winning streak. Kosta Koufos and Ty Lawson led the Nuggets with 16 points each.

The game went back and forth in the final quarter before Luke Ridnour gave the Timberwolves the lead for good on a 3-pointer with 2:43 remaining. Barea followed with another 3 to cement the win.