Smith scored 20 points, Anthony had 19, as the Knicks shook off more bad injury news before beating the Cleveland Cavaliers 91-75 on Saturday night. 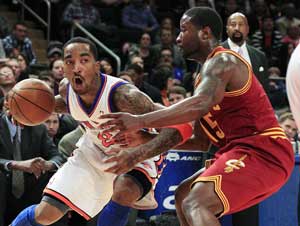 A playoff spot is there for the New York Knicks, if they stay healthy enough to get it.

With Jeremy Lin heading for knee surgery and joining Amare Stoudemire on the injured list, that will only happen if someone steps up to be the No. 2 scorer behind Carmelo Anthony.

JR Smith is the most obvious candidate.

"JR, I mean he has the ability," Anthony said. "Coming off that bench, we're going to need JR to be him every night."

Smith scored 20 points, Anthony had 19, as the Knicks shook off more bad injury news before beating the Cleveland Cavaliers 91-75 on Saturday night.

Already without Stoudemire, the Knicks announced before the game that Lin would have surgery to repair a torn meniscus in his left knee and could miss six weeks. That leaves them without their second - and third-leading scorers as they try to hold onto a playoff spot.

But they showed they still may have enough. Tyson Chandler had 14 points and 12 rebounds for the eighth-place Knicks, who bounced back from a loss in Atlanta on Friday to win for the ninth time in 11 games. They have won seven in a row at home and moved 2 1/2 games in front of Milwaukee, which lost to Memphis.

"Well, the good teams do that, no matter who's in or out of the lineup," Chandler said. "So that's what we've got to do. We've got to win games whether they're ugly or pretty."

This one was ugly, with both teams shooting below 40 percent. But the Knicks have been a much better defensive team since Mike Woodson replaced Mike D'Antoni, and they may have to rely on that defense more than ever now.

"We've just got to hang in there together and keep the bodies that we do have healthy, keep them alert and ready to play when we step out on the floor," Woodson said. "The season is what it is. I mean it's not going anywhere. We've got remaining games left we've just got to take it one game at a time. We still control our own destiny and they've got to understand that."

Antawn Jamison scored 13 for the Cavaliers, who played without injured rookie Kyrie Irving and have lost seven straight and 10 of their last 11 games. They committed 20 turnovers that led to 28 points.

"I thought we played hard. We didn't know until we sat down and talked to Kyrie that he wasn't going to play, and the players didn't know that, but I thought they came out and gave a heck of an effort," Cavaliers coach Byron Scott said. "Starting the fourth quarter, down by five, I thought we did a pretty good job, especially on the defensive end. We just turned the ball over way too many times tonight."

The victory ended a difficult week for the Knicks, who learned on Monday that Stoudemire had a bulging disk in his back. They said he could be back in two to four weeks, making it possible he could play again this season.

That's unlikely for Lin, who chose to have surgery when pain in his knee wouldn't go away after a week and whose amazing breakthrough season appears over. An undrafted point guard from Harvard who was barely hanging onto an NBA job two months ago, he became the starter in February and became the biggest story in basketball.

But the Knicks will have to go on without Linsanity, and more performances like this from Smith will help. The streaky shooter is a career 12.5 points per game scorer, but hasn't had enough good streaks since joining the Knicks after playing in China, and was just 2 of 10 in Friday's loss.

Irving sprained his right shoulder in a 121-84 loss to Milwaukee on Friday. The Cavs waited as long as they could to see if the No. 1 pick would be able to go before ruling him out.

After trading backup Ramon Sessions to the Lakers at the trade deadline, it has left them with rookie Donald Sloan as their starting point guard. With Anderson Varejao (broken right wrist) and Daniel Gibson (left foot/ankle) also out, they simply don't have enough.

Scott said team management understands that, which is why even though Dan Gilbert wrote on Twitter after Friday's loss that Cavs fans deserved better, Scott said the owner was more upbeat than he was after the game.