The New York Knicks came from 17 points down to beat Brooklyn Nets 100-97 on Tuesday, boosting their lead atop the NBA Eastern Conference standings and inflicting a fifth successive defeat on the suddenly struggling Nets. 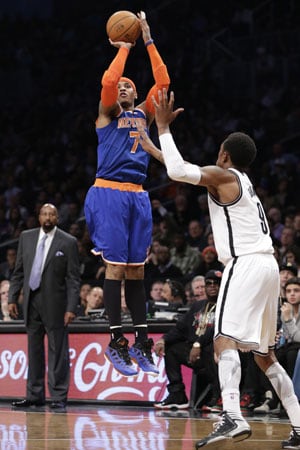 The New York Knicks came from 17 points down to beat Brooklyn Nets 100-97 on Tuesday, boosting their lead atop the NBA Eastern Conference standings and inflicting a fifth successive defeat on the suddenly struggling Nets.

Elsewhere on Tuesday, the Los Angeles Clippers brought up their longest winning streak for two decades while their crosstown rivals, the Los Angeles Lakers saw their season lurch closer to crisis with a defeat at the hands of lowly Cleveland.

Kidd finished with 18 points against his former team, who used to dominate the Knicks when he played in New Jersey. Now the series is tied at 1-1 since the Nets moved to Brooklyn, both games coming down to a tense finale.

Deron Williams and Gerald Wallace both missed potential tying 3-pointers on the last possession after Kidd broke a 97-97 tie with his 3-pointer from the left side while being fouled.

The Clippers made it seven straight wins with a 94-89 road victory over the Chicago Bulls, with Blake Griffin having 22 points and 10 rebounds.

Chicago's Marco Belinelli hit a 3-pointer with less than a minute left to cut the deficit to 89-87, but Chris Paul answered with a floater in the lane, then sealed the win with three free throws. Paul finished with 18 points.

Carlos Boozer had 24 points and 13 rebounds for the Bulls.

The Clippers have spent their history in the shadow of the Lakers, but this year it seems the gold-and-purple will play the role of Los Angeles' second team.

The Lakers lost 100-94 to the Cleveland Cavaliers, making it eight defeats in 11 games.

Cleveland's Kyrie Irving scored 28 points in his return after missing 11 games with a broken finger, and added 11 assists in 39 minutes for a team that had lost their five previous games. C.J. Miles scored 28 in his first start this season for the Cavs.

Kobe Bryant scored 42 points but it wasn't enough to stop the Lakers from losing to a Cleveland team that came in with just four wins.

Like the Knicks, the Denver Nuggets overcame a 17-point deficit to overrun the Detroit Pistons 101-94.

Brandon Knight had 20 points and five assists for the Pistons.

In Tuesday's other game, the Washington Wizards downed the New Orleans Hornets 77-70 in a low-scoring meeting of two struggling teams.