Carmelo Anthony scored 25 points while J. R. Smith and Raymond Felton added 21 each as the New York Knicks held off the Orlando Magic 99-89 on Tuesday to remain the NBA's only unbeaten team. 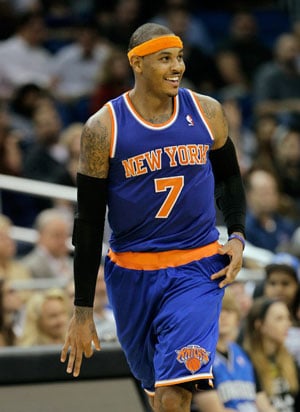 Carmelo Anthony scored 25 points while J. R. Smith and Raymond Felton added 21 each as the New York Knicks held off the Orlando Magic 99-89 on Tuesday to remain the NBA's only unbeaten team.

J.J. Redick led Orlando with 18 points, with Arron Afflalo scoring 13 for a Magic team that was stunted by 20 turnovers that led to 24 New York points.

The Magic dropped their fifth consecutive game and continue to struggle without starters Jameer Nelson and Hedo Turkoglu.

New York has won its first five matches for the first time since opening the 1993-94 season with seven victories.

At Charlotte, Ramon Sessions scored 21 points as the Bobcats beat winless Washington to get back-to-back victories for the first time since last December.

Rookie Michael Kidd-Gilchrist chipped in with 15 points and eight rebounds before leaving in the fourth quarter with a sore back.

Trevor Ariza scored 19 points for the Wizards, who fell to 0-6.

At Indianapolis, DeMar DeRozan scored 15 points and Jose Calderon had 13 points, 10 rebounds and 10 assists for Toronto.

Toronto led 69-58 heading into the fourth and hit only one field goal the rest of the way, a club low.

George Hill scored 18 points and Paul George had 12 points and nine rebounds to lead the Pacers, who have lost four of the last five.

Brook Lopez added 23 points for the Nets, who opened a 20-point lead at home for the third straight game, but this time barely let up and beat the Cavaliers for the sixth time in eight meetings after losing nine in a row, mostly during the LeBron James era.

Anderson Varejao scored a career-high 35 points and grabbed 18 rebounds for the Cavaliers, who were wrapping up a six-game, coast-to-coast trip and played much of the game with the urgency of a team that wanted to be home.

Portland used a strong third quarter to build its lead to 16 points and pushed the cushion to 22 early in the fourth. The Trail Blazers out-rebounded the Kings and connected on 14 of 27 attempts from 3-point range.

LaMarcus Aldridge scored 19 points for Portland and Wesley Matthews had 18.