The New York Knicks produced another authoritative performance to beat the Philadelphia 76ers 110-88 on Monday, bringing up their first 3-0 start to a season for 13 years. 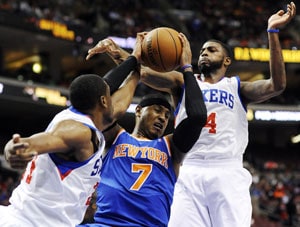 The New York Knicks produced another authoritative performance to beat the Philadelphia 76ers 110-88 on Monday, bringing up their first 3-0 start to a season for 13 years.

Carmelo Anthony scored 21 points and JR Smith had 17 for New York, which is showing its season-opening win over the Miami Heat was no fluke, cruising to another victory. The sum total of their winning margins over the first three games is 58 points.

New York broke the game open in the third quarter, stretching the lead to 21 points.

After a solid first quarter, the Sixers fell apart, and got nothing going with their set offense. Jrue Holiday led them with 17 points.

Miami also used a powerful third quarter to pull away from an opponent, downing the Phoenix Suns 124-99.

LeBron James had 23 points and 11 rebounds while Dwyane Wade scored 22 points for the Heat, who are averaging 111.8 points in their first four games. Allen became the 24th player in NBA history to eclipse the 23,000-point mark.

Miami put the game away with a 23-6 run in the third, a spurt fueled by 10 points from James and five 3-pointers in a span of less than 5 minutes.

The comeback of the day belonged to the Minnesota Timberwolves, who trailed by 22 points before overrunning the Brooklyn Nets in the fourth quarter for a satisfying 107-96 win.

The Timberwolves scored the final 11 points in an impressive rally. Seemingly out of the game early in the second half, they overwhelmed the Nets with a brilliant effort from their bench.

Rookie Russian guard Alexey Shved and Chase Budinger were instrumental in the comeback. Shved made the go-ahead basket with 2:35 remaining and had a pair of 3-pointers in the fourth after going scoreless for the first three.

The Memphis Grizzlies also had a night to remember, introducing their new owners in front of NBA commissioner David Stern then going on to beat the Utah Jazz 103-94.

Zach Randolph had 16 points and 18 rebounds while Marc Gasol added 22 points for the Grizzlies, who have won 12 straight regular season home games dating back to last season.

Gordon Hayward led Utah with 19 points, 13 in the first half.

Mayo, one of a trio of Mavericks newcomers who scored in double figures, made six 3-pointers and capped his night with a running dunk with 1:18 left. Chris Kaman had 16 points for the Mavericks.

LaMarcus Aldridge and Wesley Matthews had 20 points each for Portland.

The San Antonio Spurs extended their perfect start to the season with a fourth straight win, downing the Indiana Pacers 101-79.

Gary Neal scored 17 points while Tim Duncan added 14 points and 11 rebounds for the Spurs, who are by double figures the entire second half.

Former Spurs guard George Hill led Indiana with 15 points, with the Pacers shooting a disappointing 35 percent from the field.

The Cleveland Cavaliers needed a strong performance by rookie Dion Waiters to hang on for a 108-101 win over the Los Angeles Clippers.

The Sacramento Kings brought up their first win of the campaign after three defeats, edging the Golden State Warriors 94-92.

DeMarcus Cousins scored 23 points and grabbed 15 rebounds for the Kings, who triggered the win with a run of 16 straight points in the third quarter.

Klay Thompson had 22 points for the Warriors, who got within a point in the final minute, but missed a tying jumper and watched Stephen Curry's 3-point attempt on the buzzer go astray.

Comments
Topics mentioned in this article
NBA Philadelphia 76ers
Get the latest updates on Olympics 2020, Olympics 2020 Medal Tally, Live Cricket Score . Like us on Facebook or follow us on Twitter for more sports updates. You can also download the NDTV Cricket app for Android or iOS.