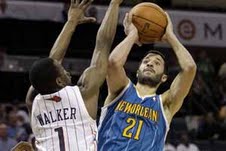 The Hornets, playing without leading scorers Eric Gordon and Chris Kaman, won despite shooting just 34 percent from the floor in the second-lowest scoring NBA game this season. Gordon was given the night off to rest, but no reason was given before the game as to why Kaman was held out of action.

Carl Landry added 14 points and 12 rebounds off the bench for New Orleans.

The loss assured the Bobcats (7-53) of the worst record in the league, giving them a 25 percent chance of landing the No. 1 pick in the NBA lottery on May 30.

The Bobcats and the rest of the NBA will learn on Tuesday if potential No. 1 pick Anthony Davis from Kentucky will enter the draft as a press conference in scheduled at Kentucky.

If the Bobcats fail to win any of their remaining games they'll finish with the worst winning percentage in league history.

For a while, the teams flirted with a different kind of NBA futility.

The league record for fewest points scored in a game was set on Feb. 27, 1955 when the Milwaukee Hawks and Boston Celtics combined for 119.

This game was tied at 47 after three quarters.

The Bobcats trailed by as many as eight in the second quarter but closed the half on an 18-6 run to take a 39-35 lead at the break as Kemba Walker provided a spark with seven points during the stretch. The teams combined to shoot 37 percent in the first half.

Things got progressively worst in the third quarter as they combined to score just 20 points, the lowest in the league in a quarter this season and the fewest since 2004- on 15 percent (6 for 40) shooting.

The Hornets stretched their lead to seven in the fourth quarter after Marco Belinelli knocked down a 3-pointer from the top of the key. The Bobcats would claw back to close the gap to two after Henderson got hot, but Vazquez hit a runner in the lane to make it a two-possession game.

Kemba Walker missed on the other end and Belinelli hit a free throw to push the lead to five with a free throw with 35 seconds left to put the game out of reach. The Bobcats, who shot 30 percent for the game, couldn't buy a bucket in the final minute.