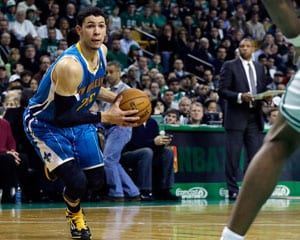 Greivis Vasquez scored 15 points with 11 rebounds and Al-Farouq Aminu had 18 points and nine rebounds for New Orleans, which won for the sixth time in seven games and stopped Boston's six-game winning streak. Austin Rivers scored eight points against his dad's team; they became the fourth father-son matchup in NBA history.

Paul Pierce scored 12 points with 10 rebounds before fouling out in the final minutes.

Anthony Davis had 10 points and 10 rebounds for the Hornets.

Miami's LeBron James became the youngest player in NBA history to score 20,000 points and also surpassed 5,000 assists to lead the Heat to a 92-75 win over the Golden State Warriors.

James finished with 25 points, 10 assists and seven rebounds to eclipse both marks before halftime as he helped Miami go ahead by 34 points in the third quarter and allowed coach Erik Spoelstra to rest his starters for the fourth.

David Lee had 12 points and 11 rebounds for Golden State and Jarrett Jack scored 16 in place of Stephen Curry.

Tony Parker had 17 points and 11 assists for San Antonio and Tim Duncan scored 19 to help the Spurs beat the Memphis Grizzlies 103-82 and extend their home winning streak to 13 games.

At Oklahoma City, Russell Westbrook scored 32 points and Kevin Martin had 20 as the Thunder ended the Denver Nugget's six-game winning streak with a 117-97 victory.

Atlanta's Jeff Teague had a career-high 28 points and 11 assists as the short-handed Hawks ended Brooklyn's seven-game winning streak with a 109-95 defeat of the Nets, while Dirk Nowitzki scored 19 points as the Dallas Mavericks held off a Jeremy Lin-led surge to beat the Houston Rockets 105-100.

In other games, the Orlando Magic beat the Indiana Pacers 97-86, the Cleveland Cavaliers defeated the Portland Trail Blazers 93-88 and the Sacramento Kings edged the Washington Wizards 95-94.

Comments
Topics mentioned in this article
NBA Austin Rivers
Get the latest updates on ICC T20 Worldcup 2022 and CWG 2022 check out the Schedule, Live Score and Medals Tally. Like us on Facebook or follow us on Twitter for more sports updates. You can also download the NDTV Cricket app for Android or iOS.