Brooklyn's Brook Lopez and Andray Blatche each scored 18 points as the Nets won their third straight game by beating the Atlanta Hawks 93-80 on Saturday. 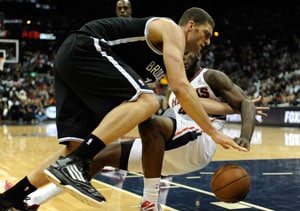 Brooklyn's Brook Lopez and Andray Blatche each scored 18 points as the Nets won their third straight game by beating the Atlanta Hawks 93-80 on Saturday.

Al Horford finished with 15 points and 12 rebounds for the Hawks, who seemed lethargic after losing in overtime at Boston on Friday. Atlanta has lost five of six.

The result kept the Nets 2-1/2 games behind New York, which cruised past slumping Utah. In other key games, Milwaukee pulled away late to beat Golden State and Denver notched a 13th straight home win by downing Minnesota.

Brooklyn's Lopez, who finished with nine rebounds, scored 14 points in the third quarter, including a runner that gave Brooklyn its first 20-point lead.

New York's J.R. Smith scored 24 points as the Knicks shook off the absence of Carmelo Anthony and the shock of Amare Stoudemire needing more knee surgery to rout the Utah Jazz 113-84.

The Knicks learned earlier Saturday that Stoudemire requires surgery that will sideline him approximately six weeks. But they still have plenty of scoring off the bench, with Steve Novak adding a season-high 20 points.

Alec Burks scored 14 points for the Jazz, who completed a 0-4 road trip that dropped them into a tie with the Los Angeles Lakers for the eighth and final playoff spot in the Western Conference.

Milwaukee's Brandon Jennings had 31 points and 10 assists while Monta Ellis scored 26 points against his former team as the Bucks pulled away late to beat the Golden State Warriors 103-93.

Ellis added five assists and five rebounds to carry the Bucks to their fifth win in six games. The Bucks are 3-0 against the Warriors since sending center Andrew Bogut to the Bay Area for Ellis.

Denver's Ty Lawson matched his season high with 32 points, including 14 in the fourth quarter, as the Nuggets beat the injury-depleted Minnesota Timberwolves 111-88 to stretch its home winning streak to its longest in 14 years.

Corey Brewer had 15 points for the Nuggets, who have won eight in a row overall. Denver ran its home record to 28-3, tying Miami for best in the league.

J.J. Barea added 15 points for Minnesota, which lost for the seventh time in eight games.

Phoenix's Goran Dragic scored 13 of his 18 points and delivered a key hustle play in the fourth quarter to help the Suns beat the Houston Rockets 107-105.

Washington's Trevor Ariza scored a season-high 26 points as the Wizards shot 50 percent and led from start to finish in a 104-87 win over the Charlotte Bobcats, who suffered their 10th straight loss.