Marc Gasol had 23 points, nine rebounds and eight assists to help put the Grizzlies (6-5) over .500 for the first time this season. Mike Conley scored eight of his 15 points during a 4-minute span of the fourth quarter. 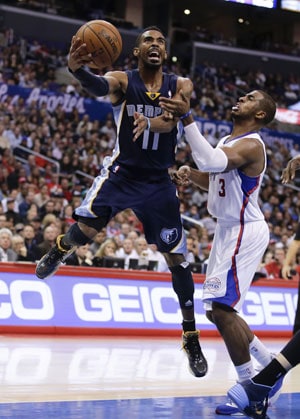 Zach Randolph had 26 points and 15 rebounds against his former team as the Memphis Grizzlies overcame the first-quarter ejection of shooting guard Tony Allen to beat the Los Angeles Clippers 106-102 on Monday.

Marc Gasol had 23 points, nine rebounds and eight assists to help put the Grizzlies (6-5) over .500 for the first time this season. Mike Conley scored eight of his 15 points during a 4-minute span of the fourth quarter.

Blake Griffin had 23 points and 11 rebounds for the Clippers. Chris Paul had 18 points and 11 assists for his 11 straight double-double, the most by any player from the start of a season since Magic Johnson in 1990-91.

Allen was charged with a flagrant-2 foul with 1:51 left in the opening quarter after he lifted his left leg in a vain attempt to impede Paul's drive to the basket and kicked him in the face. Allen walked over to Paul at the foul line to apologize while referees Bill Kennedy, Mark Ayotte and John Goble watched the replay at the official scorer's table to determine the severity of the foul.

Damian Lillard finished with 19 points and nine assists as the Trail Blazers withstood the Nets' blistering start to win seven in a row in the same season for the first time since a 13-game run in December 2007.

Portland (9-2) is just a half-game behind San Antonio and Indiana for the NBA's best record. The Blazers will try to complete a perfect 4-0 road trip Wednesday at Milwaukee.

Shaun Livingston scored 23 points for the Nets, who stormed out to their best first quarter of the season and then seemed to run out of gas against the younger Trail Blazers. Kevin Garnett made all six shots in the 40-point first period, then went 2 for 13 from there to finish with a season-high 16 points.

Chicago's Luol Deng scored 21 points as the Bulls overcame a rough shooting night to record their fifth straight win with an 86-81 victory over the Charlotte Bobcats.

Carlos Boozer had 12 points and 17 rebounds for Chicago, which is on its longest winning streak since taking eight in a row from Feb. 20-March 7, 2012. Jimmy Butler had 14 points and Derrick Rose finished with 12.

Jeffery Taylor led Charlotte with a career-high 20 points and Henderson had 16.

Kevin Durant scored 38 points for Oklahoma City and Russell Westbrook had 30 points and 12 rebounds as the Thunder came back to edge the Denver Nuggets 115-113.

Westbrook also had seven assists in a terrific all-around game that helped Oklahoma City erase a 14-point deficit in the second half. Reggie Jackson added 14 points.

In other games, the Dallas Mavericks beat the Philadelphia 76ers 97-94 and the Golden State Warriors downed the Utah Jazz 98-87.

Comments
Topics mentioned in this article
NBA Marina Erakovic Los Angeles Clippers Zach Randolph Mike Conley
Get the latest Cricket news, check out the India cricket schedule, Cricket live score . Like us on Facebook or follow us on Twitter for more sports updates. You can also download the NDTV Cricket app for Android or iOS.