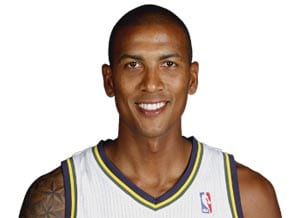 Bell, a Utah Jazz guard, will also conduct an NBA Cares clinic at the stadium in conjunction with a Delhi-based NGO,

'Love in Action', which uses the sport to provide life-skills education to children from slums.

Bell is also scheduled to have a stint with India's senior men's national basketball team before returning home on July 17.

"I am looking forward to have an interaction with the budding basketball players here. I will share my knowledge and experience with them and will also be taking note of the areas that need to be worked upon," Bell, who had an up-and-down season for his club this season, said.

He added that NBA was taking a lot of initiatives to lift the profile of the sport in India and added that there was no reason why the hoopsters here can't make it to the big stage.

Bell, however, said that basketball needs to be popularised among youth so that the country has a big pool to pick from.

"I don't see any reason why Indian players can't make it to the NBA or the WNBA. The Association is already taking a lot of initiatives for the betterment of the sport in the country and I am sure with the time you will be able to see

Indian players playing at the big stage," he added.

The six foot five inch tall player also pointed that there was a need to educate the local coaches here and said he will be spending some time to listen to their requirements.

The junior National Skills Challenge, the school-based program which was held across Mumbai, Pune, Chennai, Chandigarh and Delhi will culminate here with the top 10 winners (five boys and five girls) from each of the five cities battling it out for the national champion's crown.

A boy and a girl, who will complete the skill test with the best timing will be crowned as the national champions. The winners will win a trip to the NBA All-Star Weekend 2013 in Houston, USA.

Comments
Topics mentioned in this article
NBA C.J. Miles Los Angeles Lakers Utah Jazz Al Jefferson Gordon Hayward Cleveland Cavaliers
Get the latest updates on ICC T20 Worldcup 2022, check out the Schedule and Live Score. Like us on Facebook or follow us on Twitter for more sports updates. You can also download the NDTV Cricket app for Android or iOS.