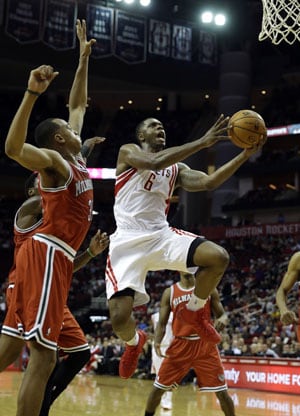 Terrence Jones had a career-high 36 points and 11 rebounds, and the Houston Rockets led from the start in a 114-104 win over the Milwaukee Bucks in the NBA on Saturday.

Brandon Knight scored 26 points with seven assists for the NBA-worst Bucks, who have dropped eight in a row.

Jones received a standing ovation when he grabbed a rebound off a missed 3-pointer by O.J. Mayo and dribbled by him with a slick spin move before driving into the lane and finishing with an off-balance layup to push the lead to 112-97 with about 21/2 minutes remaining.

The 22-year-old Jones is the second-youngest Rocket to have a 30-point game behind Hakeem Olajuwon.

Star forward Dwight Howard added 20 points and 14 rebounds for the Rockets, Aaron Brooks had 10 points and four assists and Jones also had two blocks, a steal and an assist.

John Henson had 20 points and 15 rebounds for Milwaukee and Luke Ridnour added 14 points.

In Charlotte, North Carolina, LeBron James had 34 points and eight rebounds, and the Miami Heat beat the Charlotte Bobcats for the 15th straight time, 104-96 in overtime.

James scored six points in the extra period, including two driving layups to lift the Heat to their second win in two nights. Chris Bosh added 25 points and seven rebounds for Miami.

Al Jefferson had 22 points to lead the Bobcats, who were playing their fourth game in five nights.

Paul George scored 36 points, leading the Indiana Pacers past the Los Angeles Clippers, 106-92 for its fourth straight win. Lance Stephenson added 22 points and 12 rebounds to help the Pacers improve to 32-7 and retain the league's top record.

Jamal Crawford scored 22 points for the Clippers, who had their five-game winning streak ended.

In Chicago, Joakim Noah had 21 points and 16 rebounds, Carlos Boozer added 15 points and 13 boards, and the Chicago Bulls beat the Philadelphia 76ers 103-78.

Noah extended his streak of double-digit rebound games to 12, the longest stretch of his career as Chicago recorded its seven win from nine games in 2014.

D.J. Augustin scored nine points and dished out seven assists in the pivotal second quarter, in which Chicago extended its lead from five to 20. He finished with 19 points and eight assists.

In other games on Saturday, the Minnesota Timberwolves thrashed the Utah Jazz, 98-72, and the Portland Trail Blazers beat the Dallas Mavericks 127-111.