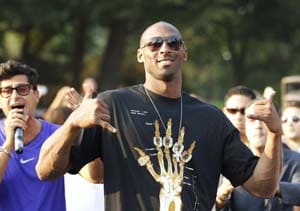 He has not uttered one word yet, but Kobe Bryant's mere presence on a Twitter-like Chinese-language microblogging site has stirred plenty of excitement.

Sina Weibo has verified that the NBA superstar has set up an individual account on its hugely popular site. Bryant's followers numbered more than 100,000 within hours on Thursday.

One of them - "Home of Kobe" - has more than 200,000 followers. Along with other sites, it posted a welcome message for Bryant and encouraged fans to leave comments for him by promising to help translate some of the remarks.

Comments
Topics mentioned in this article
Tiger Woods Kobe Bryant MS Dhoni Eoin Morgan NBA Rafael Nadal Carlton Cole Danny Gabbidon
Get the latest updates on ICC Women's Cricket World Cup 2022 and IPL 2022, check out the Schedule , Live Score and IPL Points Table. Like us on Facebook or follow us on Twitter for more sports updates. You can also download the NDTV Cricket app for Android or iOS.