The win moved the Spurs into equal second in the Western Conference standings, behind new leader Oklahoma City, which got a super performance from Kevin Durant in its comeback win over Minnesota and moved above Portland, which was narrowly beaten at home by Philadelphia. 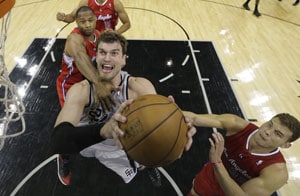 The win moved the Spurs into equal second in the Western Conference standings, behind new leader Oklahoma City, which got a super performance from Kevin Durant in its comeback win over Minnesota and moved above Portland, which was narrowly beaten at home by Philadelphia.

San Antonio's Tiago Splitter had 22 points before leaving with a shoulder injury and Tim Duncan added 19 points and 11 rebounds.

Jamal Crawford scored 24 points for the Clippers who missed Paul after he suffered a shoulder injury on Friday against Dallas.

Oklahoma City's Kevin Durant scored 23 of his season-high 48 points in the fourth quarter and hit the winner with 4 seconds to play, rallying the Thunder from 13 points down in a 115-111 victory over Minnesota.

Durant went 7 for 11 from the field and hit four 3-pointers in the final quarter, while Derek Fisher scored 13 points for the Thunder, who won despite being outscored 66-46 in the key.

Kevin Love played the entire second half and finished with 30 points, 14 rebounds and five assists for the Wolves. But he missed four free throws in the final 27 seconds to let this one slip away. The last three came when he was fouled on a 3-pointer with 2.2 seconds to go and the Wolves down by two.

Paul George had 24 points and 10 rebounds to lead four Pacers in double figures, with Lance Stephenson scoring 19 points on 8-of-12 shooting.

Indiana went on a 14-0 run over a 4:12 span of the third quarter as the Pelicans missed seven straight field goals.

Eric Gordon finished with 21 points for the Pelicans but only four in the second half.

Philadelphia made it four-straight wins - all on the road - by beating Portland 101-99, led by 30 points from Thaddeus Young.

Evan Turner added 23 points for the 76ers, and rookie Michael Carter-Williams had 16, but fell hard on the court at the final buzzer when he was trying to keep Damian Lillard from scoring the tying basket. After a few moments he got up holding his head.

Portland's LaMarcus Aldridge had 29 points and 14 rebounds for his 20th double-double this season.

Miami's Dwyane Wade and Chris Bosh each had 20 points, helping the Heat rally for a 110-94 win over state rival Orlando.

Rashard Lewis added 18 points for the Heat, who have now won 22 consecutive games against divisional rivals, moving within one victory of tying Boston's record set in 1961.

Chicago's Mike Dunleavy scored 11 of his 20 points in the fourth quarter, steering the Bulls to a 91-84 victory against Atlanta.

Phoenix's Gerald Green had 24 points and a career-high five steals starting in place of the injured Eric Bledsoe, pushing the Suns to a 116-100 win over Milwaukee.

Brooklyn's Paul Pierce had 17 points to move up to 19th place on the NBA's career scoring list, above Allen Iverson, helping the Nets down Cleveland 89-82.