Chris Paul scored 12 of his 23 points in the final 2:42, including a go-ahead layup with 24.6 seconds left, in leading the Los Angeles Clippers over the Houston Rockets 95-91 in the NBA on Saturday. 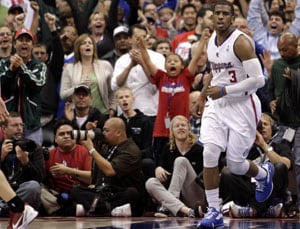 Chris Paul scored 12 of his 23 points in the final 2:42, including a go-ahead layup with 24.6 seconds left, in leading the Los Angeles Clippers over the Houston Rockets 95-91 in the NBA on Saturday.

The victory put the Clippers within 2 1/2 games of the idle Los Angeles Lakers in the race for the Pacific Division lead.

Blake Griffin had 18 points and eight rebounds before fouling out with 4.9 seconds remaining. Randy Foye, filling in at shooting guard for the injured Chauncey Billups, added 15 points in what could be his last start because of the acquisition of Nick Young on Thursday from Washington.

Courtney Lee led Houston with a season-high 25 points despite a strained tendon in the middle finger of his left hand. Chase Budinger added 19 points, and Goran Dragic had 14 assists and 11 points.

Lin also had seven rebounds and six assists. Carmelo Anthony and Amar'e Stoudemire each scored 16 points and J.R. Smith added 11 for the Knicks, who won on the road for just the eighth time this season.

The Knicks have won all three games by an average of nearly 24 points since Woodson took over for Mike D'Antoni. New York defeated the Pacers 115-100 on Friday night in New York.

Roy Hibbert had 24 points and 12 rebounds, Paul George scored 18 points and Darren Collison added 15 points for Indiana, which made just 4 of 15 shots in the fourth quarter.

At Charlotte, North Carolina, D.J. Augustin scored 23 points and had 11 assists as Charlotte held off Toronto.

Gerald Henderson added 24 points, Corey Maggette had 21 and Tyrus Thomas had 11 for the Bobcats, who overcame a 15-point deficit in the second quarter to win for the second time in their past four games.

Charlotte, which still has the league's worst record at 7-36, went on to lead by as many as 16 points with less than 4 minutes remaining. But the Raptors rallied, pulling within 105-103 on Jerryd Bayless' 3-pointer with 11.7 seconds left.

Augustin hit two free throws with 9.9 seconds left to put the Bobcats up by four points.

The Bulls overcame an early 14-point deficit without Derrick Rose, who missed his third straight game with a strained groin. Even with the reigning MVP missing 13 games this season, the Bulls still have the best record in the NBA at 37-10. The Bulls are 9-4 without Rose.

Jrue Holiday led the 76ers with 30 points, who dropped its third straight overall and have lost seven of nine on the road. Holiday got little help as Andre Iguodala and Elton Brand were both held to seven points each.

At Newark, New Jersey, Chris Kaman scored 20 points, including a key 23-foot jumper with a second left on the shot clock and 45 seconds left in the game, giving New Orleans victory over New Jersey.

With the Hornets leading 95-94, Kaman made his jumper and then Marco Belinelli, with 20 points, sealed the win with a fall-away 3-pointer with 16.8 seconds left, also with the shot clock down to a second.

Jarrett Jack, whose 3-pointer in the final minute gave the Hornets the lead for good, added 16 points.

Deron Williams had 20 points and 12 assists for the Nets. They also got 20 points from Anthony Morrow and 16 from Gerald Green.

Jason Terry added 17 points and Rodrigue Beaubois 16 for the Mavericks, who won their third consecutive game.

After home wins over Washington and Charlotte, the NBA's two worst teams, beating the Spurs was much more impressive, even if the Southwest Division leaders were playing the second consecutive night. Dallas never trailed and the only tie was at 2-all.

With the shot clock running down late in the third quarter, Nowitzki got the ball with Manu Ginobili right on top of him. The Mavericks' perennial All-Star made a 20-foot jumper for a 10-point lead and let out a scream, as much exhilaration as letting officials know he thought he was also fouled.

It was the sixth double-double in the past 13 games for Faried. Arron Afflalo added 15 points for Denver, which has beaten the Celtics seven of the past eight times in Denver.

Paul Pierce and Kevin Garnett had 22 points each for Boston. Rajon Rondo had 12 points and 16 assists.

Jefferson, Utah's leading scorer and rebounder, was attending his grandmother's funeral in Mississippi.

Favors scored four of the first six points in overtime and the Jazz earned their sixth straight home win, and second straight in overtime.

Favors, who came to Utah from New Jersey in the trade for Deron Williams last season, made a three-point play and a block in the closing seconds of regulation to send the game to overtime.

Comments
Topics mentioned in this article
Los Angeles Clippers Formula 1 NBA Lionel Messi Blake Griffin Chris Paul
Get the latest updates on IPL 2021, IPL Points Table , IPL Schedule 2021 , live score . Like us on Facebook or follow us on Twitter for more sports updates. You can also download the NDTV Cricket app for Android or iOS.