Portland's LaMarcus Aldridge had 25 points and 14 rebounds while Damian Lillard added 21 points, 11 assists and a pair of clinching free throws with 2.1 seconds left to give the Trail Blazers their second win in a month over their chief divisional rival. 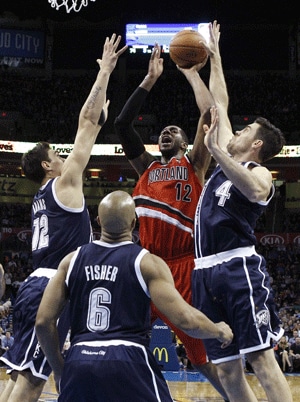 Portland stormed back from a 13-point second-half deficit to win 98-94 at Oklahoma City on Tuesday, moving within half a game of the Thunder atop the Northwest Division.

Their clash was the New Year's Eve standout, while elsewhere, Indiana maintained the NBA's best record with a strong finish to overwhelm Cleveland, San Antonio rolled past a listless Brooklyn, and Sacramento won a close game at Houston.

Portland's LaMarcus Aldridge had 25 points and 14 rebounds while Damian Lillard added 21 points, 11 assists and a pair of clinching free throws with 2.1 seconds left to give the Trail Blazers their second win in a month over their chief divisional rival.

Kevin Durant had 37 points and 14 rebounds for the Thunder, which had won 20 of its past 22 games before Tuesday. But Durant managed only one point in the fourth quarter and missed an 11-foot jumper that would have tied the game in the final seconds.

Indiana dominated the fourth quarter to push past Cleveland and win 91-76.

Paul George scored 21 points and Roy Hibbert added 19 for the Pacers, who have won eight in a row against Cleveland; their longest active streak against any opponent. They limited the Cavaliers to 3-of-16 shooting and forced seven turnovers in the final period.

Cleveland, which has suffered six straight defeats, lost star Kyrie Irving to a knee injury in the third quarter and he will have a scan on Wednesday. Anderson Varejao led the Cavs with 14 points and 11 rebounds.

San Antonio's Big Three were again to the fore in a 113-92 stroll past Brooklyn.

Tony Parker had 18 points while Manu Ginobili and Tim Duncan had 15 each for the Spurs.

Miles Plumlee and Shaun Livingston had 15 points each to lead Brooklyn while Kevin Garnett was held to two points, failing to make a field shot for only the second time in his 19-year career.

The Kings trailed by three points before DeMarcus Cousins scored four quick points to make it 105-104. He then stole the ball and passed to Ben McLemore for an easy layup. On the next play, Cousin took a charge to give the Kings the ball back.

The late comeback ruined a big night by James Harden, who finished with a season-high 38 points for the Rockets, and had 10 rebounds and two steals.

Atlanta's Paul Millsap had season highs with 34 points and 15 rebounds as the Hawks pipped Boston 92-91.

Golden State's David Lee had 22 points to lead the Warriors past Orlando 94-81.

Toronto rallied to an 85-79 win at Chicago, with Jonas Valanciunas scoring 15 points.

Milwaukee handed Los Angeles its sixth straight loss, with Brandon Knight scoring 18 of his career-high 37 points in the third quarter to drive the Bucks to a 94-79 road win.

Comments
Topics mentioned in this article
Portland Trail Blazers Oklahoma City Thunder NBA
Get the latest Cricket news, check out the India cricket schedule, Cricket live score . Like us on Facebook or follow us on Twitter for more sports updates. You can also download the NDTV Cricket app for Android or iOS.