Lillard was 3 for 3 from the floor in the extra period as the Blazers escaped after blowing a 17-point lead in regulation. 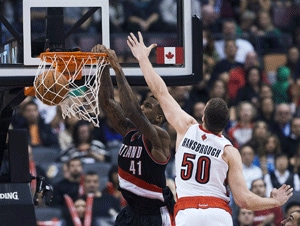 The Portland Trail Blazers won their sixth straight game with a 118-110 overtime victory over the Toronto Raptors on Sunday after LaMarcus Aldridge and Damian Lillard each scored 25 points and Nicolas Batum added 24.

Lillard was 3 for 3 from the floor in the extra period as the Blazers escaped after blowing a 17-point lead in regulation.

Rudy Gay forced overtime with a buzzer-beating layup and equaled a season high with 30 points to go with 10 rebounds. DeMar DeRozan scored 29 points and Jonas Valanciunas added a season-high 19.

The Blazers made a season-high 15 3-pointers, finishing 15 for 32 from beyond the arc. Toronto made just three.

Jordan Hill had career highs of 24 points and 17 rebounds for the Lakers, and Nick Young and Jodie Meeks scored 19 points each in Los Angeles' 114-99 victory over the Detroit Pistons.

Steve Blake had nine points and 16 assists for the Lakers, who made a late surge for just their second victory in six games. Los Angeles scored 16 consecutive points in a rally spanning the third and fourth quarters, holding Detroit without a field goal for more than five minutes.

Brandon Jennings scored 23 points and Andre Drummond had 14 points and 13 rebounds for the Pistons, who have lost five of six.

At Sacramento, California, Zach Randolph scored nine of his 22 points in the fourth quarter and also had 10 rebounds to lead the Memphis Grizzlies over the Sacramento Kings 97-86.

The Grizzlies led by 20 points in the third quarter and survived a second-half rally by the Kings to win their second straight on their four-game road trip that includes tough games Monday against the Clippers and Wednesday at Golden State.

Travis Outlaw scored a season-high 18 points for the Kings, who have lost two straight and seven of eight. Isaiah Thomas added 15 points and Marcus Thornton had 12. DeMarcus Cousins, who came into the game averaging 22.8 points, had nine points in 19 minutes.

Comments
Topics mentioned in this article
Toronto Raptors NBA
Get the latest Cricket news, check out the India cricket schedule, Cricket live score . Like us on Facebook or follow us on Twitter for more sports updates. You can also download the NDTV Cricket app for Android or iOS.