Paul Pierce scored 22 points after another sensational start, helping the Nets move to the brink of a postseason spot by beating the Minnesota Timberwolves 114-99 on Sunday for their club record-equaling 13th straight home victory. 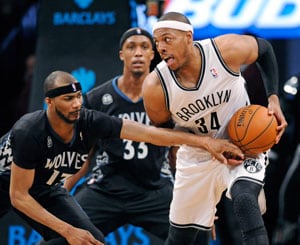 The Brooklyn Nets have gone from disappointment to dominant, a team that was booed on its home floor and now rarely loses there.

And pretty soon, the Nets will also be a playoff team.

Paul Pierce scored 22 points after another sensational start, helping the Nets move to the brink of a postseason spot by beating the Minnesota Timberwolves 114-99 on Sunday for their club record-equaling 13th straight home victory.

"First part of the season was rough on us with injuries and everything that we went through," guard Deron Williams said. "It feels good to be able to turn it around."

Pierce scored 16 in the first quarter, two nights after putting up 17 in the period. He couldn't keep it going after asking for a rest so he would stay fresh to defend Kevin Love, but the Nets had to plenty more to pull away.

Joe Johnson added 19 points for the Nets, who had a 10-21 win-loss record when they reached the new year, but will clinch a playoff spot with either another win or a loss by the New York Knicks.

A postseason berth was viewed as a sure thing when the Nets acquired Pierce and Kevin Garnett while assembling a team that would cost more than $180 million, but they struggled early and then lost leading scorer Brook Lopez to a season-ending foot injury.

"I think a lot of teams with bad character, bad leadership in the locker room would've laid down a long time ago," Pierce said. "But not this group."

Brooklyn equaled the longest home winning streak in the NBA this season and the best in the history of the franchise, done twice in 2002 when the Nets were still based in New Jersey. They have won 20 of their last 22 games at Barclays Center.

Corey Brewer and Kevin Martin each scored 21 for the Timberwolves, who had won two in row and were coming off the highest-scoring game in the NBA this season, when they scored a franchise-record 143 points in a rout of the Lakers on Friday. But they had only 17 in the fourth quarter of this one as Brooklyn surged to the finish. The Lakers recovered from that big loss with a 115-99 win over the Suns.

The Cavaliers kept their playoff push alive with a 90-76 win over the Indiana Pacers, who are losing their grip on the No. 1 seed in the Eastern Conference.

Tristan Thompson had 16 rebounds as the Cavs ended a nine-game losing streak against Indiana. Cleveland came in three games behind slumping, idle Atlanta for the conference's final playoff spot. With seven games left - six against teams with losing records - the Cavaliers still have a chance.

The Pacers, meanwhile, are falling apart. They lost their fifth straight road game and now lead Miami by one game for the East's top record and home-court advantage.

At Oklahoma City, Kevin Durant had 31 points and nine assists to help the Thunder beat Utah Jazz 116-96. Durant scored at least 25 points for the 38th consecutive game, the longest streak since Michael Jordan did it in 40 straight games for the Chicago Bulls in the 1986-87 season.

Elsewhere, the Raptors had a 98-93 win over the Magic, the Chicago Bulls held off the Celtics 107-102 in Boston, the Trail Blazers beat the Grizzlies 105-98 and the New York Knicks moved within one game of the final playoff spot with an 89-84 win over the Golden State Warriors.