DeMarre Carroll added 19 points and Pero Antic had 17 for the Hawks, who ended a nine-game losing streak against the Heat. 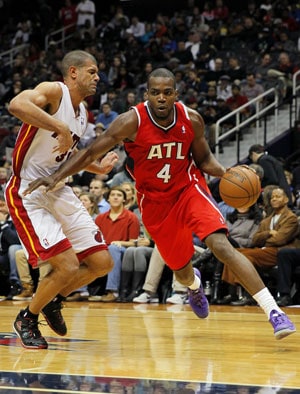 DeMarre Carroll added 19 points and Pero Antic had 17 for the Hawks, who ended a nine-game losing streak against the Heat.

Chris Bosh had 21 points for Miami, which was without Dwyane Wade for the second straight game.

Indiana's Paul George scored 23 points, and Roy Hibbert had 14 points and 13 rebounds as the NBA-leading Pacers built a big lead before holding off the Golden State Warriors 102-94 for their fifth straight win.

The Pacers (33-7) went ahead by 20 in third quarter, watched the Warriors whittle the lead to two and then regrouped in the closing minutes to open a five-game West Coast trip with a victory.

David West added 17 points and Lance Stephenson finished with 14 points, 10 rebounds and seven assists to help the Pacers pull away for good.

Stephen Curry had 24 points and nine assists, and David Lee had 20 points and 12 rebounds for the Warriors, who have lost four of six since their 10-game winning streak.

At New York, Joe Johnson scored 25 points as the Brooklyn Nets sent the Knicks to a fourth straight loss 103-80 to level this season's New York rivalry at one game each.

Making a triumphant return from London and completing a three-game, three-country road trip, the Nets improved to 7-1 in 2014 and avenged last month's blowout loss.

Andray Blatche had 19 points and 12 rebounds, and Alan Anderson scored 15 points for the Nets.

Carmelo Anthony had 26 points and 12 rebounds for the Knicks.

The Chicago Bulls edged the Los Angeles Lakers 102-100 after Taj Gibson made a layup at the buzzer in overtime.

With nine-tenths of a second left, Mike Dunleavy inbounded from underneath the basket and found Gibson cutting down the middle. The athletic forward then muscled toward the hoop for the winning basket, which was confirmed in a video review by the officials.

In other games, the Los Angeles Clippers defeated the Detroit Pistons 112-103, the Dallas Mavericks downed the Cleveland Cavaliers 102-97, the New Orleans Pelicans beat the Memphis Grizzlies 95-92, the Washington Wizards overcame the Philadelphia 76ers 107-99 and the Charlotte Bobcats were 100-95 winners over the Toronto Raptors.

Comments
Topics mentioned in this article
NBA
Get the latest updates on India vs Australia Series, check out the India vs Australia Schedule for 2020-21 and Ind vs Aus live score . Like us on Facebook or follow us on Twitter for more sports updates. You can also download the NDTV Cricket app for Android or iOS.