Among other games, Golden State rallied from a big deficit and came up with a last-gasp winner to sink Dallas, former Celtics coach and now L.A. Clippers boss Doc Rivers won his first game back in Boston, and San Antonio's experienced core led the Spurs to a rout of Milwaukee. 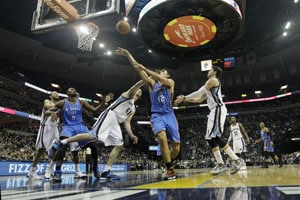 Oklahoma City made it 12 wins from 13 games with a 116-100 win at Memphis on Wednesday, with Russell Westbrook scoring 27 points for the Thunder.

Among other games, Golden State rallied from a big deficit and came up with a last-gasp winner to sink Dallas, former Celtics coach and now L.A. Clippers boss Doc Rivers won his first game back in Boston, and San Antonio's experienced core led the Spurs to a rout of Milwaukee.

Oklahoma City's Kevin Durant added 18 points, and the Thunder had enough in hand to rest both him and Durant in the fourth quarter while maintaining a double-digit lead.

Mike Conley had 20 points for the Grizzlies, who were playing the last of a season-long six-game homestand.

Golden State's Stephen Curry made a pull-up jump shot with 3 seconds remaining to cap a sensational fourth quarter rally by the Warriors, who came from 18 points down to pip Dallas 95-93.

Curry scored 16 of his 33 points in the final period and finished with nine assists, four rebounds and another big shot in a young career already full of them.

With the clock winding down, Curry dribbled on the perimeter, came off a screen, faked a shot to send an opponent jumping past him, then made a 19-footer to give Golden State the lead for good.

Dallas' Jose Calderon heaved a desperation shot at the buzzer that was never close.

Harrison Barnes scored 17 points for the Warriors who overcame 18 turnovers and a sloppy start.

Monta Ellis and Dirk Nowitzki each scored 21 points for the Mavericks.

Boston's Jamal Crawford hit a pair of 3-pointers 23 seconds apart to help the Clippers pull away in the last 3 minutes and beat Boston 96-88.

Crawford came off the bench to score 21 points and Chris Paul had 22 points, nine assists and seven rebounds for the Clippers.

Jeff Green scored 29 points for the Celtics up against his old coach Rivers.

Boston lost to the Brooklyn Nets on Tuesday night, kicking off a reunion week of sorts by facing former Celtics Kevin Garnett and Paul Pierce. One night later, Rivers returned to the TD Garden.

San Antonio's Tim Duncan had 21 points and 16 rebounds while playing just 24 minutes and Tony Parker added 15 points to lead the Spurs to a 109-77 thumping of Milwaukee.

San Antonio shook off some mediocre recent form and dominated from the opening tip, scoring the first nine points and built that to a yawning 38-point lead after three quarters. It could have been worse for Milwaukee, as the Spurs made only four of 17 3-point attempts.

New Orleans' Ryan Anderson shook off an unusually poor shooting night from long range, hitting two clutch 3-pointers in overtime that carried the Pelicans to a 111-106 victory over Detroit.

Jason Smith scored 22 points and grabbed a career-high 16 rebounds for the Pelicans while Anderson finished with 22 points on 6-of-18 shooting.

New Orleans native Greg Monroe had 28 points and 10 rebounds for Detroit, which led by 3 points early in overtime but lost their third in a row.

Minnesota's Kevin Love had 26 points, 15 rebounds and five assists as the Timberwolves rallied from a 19-point deficit to beat slumping Philadelphia 106-99.

Orlando snapped a six-game skid by beating Charlotte 92-83, with Jameer Nelson scoring 12 of his 17 points in the fourth quarter to guide the Magic home.

New York blew a 23-point lead before recovering to beat Chicago 83-78, with Carmelo Anthony having 30 points and 10 rebounds.

Comments
Topics mentioned in this article
NBA Marina Erakovic
Get the latest Cricket news, check out the India cricket schedule, Cricket live score . Like us on Facebook or follow us on Twitter for more sports updates. You can also download the NDTV Cricket app for Android or iOS.