The Thunder again made light of the absence of the injured Russell Westbrook, taking a comfortable win that moved them out of a tie with Portland for the overall lead. 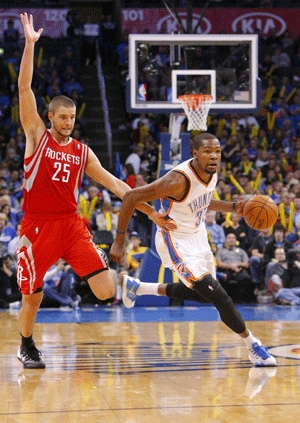 Oklahoma City moved into sole possession of the NBA lead with a 117-86 rout of Houston on Sunday, with Kevin Durant having 33 points and 13 rebounds.

The Thunder again made light of the absence of the injured Russell Westbrook, taking a comfortable win that moved them out of a tie with Portland for the overall lead.

Oklahoma City made it 12 wins from 13 games, as Jeremy Lamb added a career-high 22 points and five assists, while Reggie Jackson - starting in Westbrook's place - had 16 points and eight assists.

Aaron Brooks had 17 points for Houston, which was playing its fourth game in five days, and after winning the previous three they were convincingly beaten by the Thunder. The Rockets missed their first 12 shots and shot 36.5 percent from the field (31 of 85).

San Antonio experienced trio performed strongly in the closing stages to guide the Spurs to a 112-104 win over Sacramento.

Manu Ginobili scored 28 points, Tony Parker added 22, and Tim Duncan had 17 points and 13 rebounds for the Spurs, who struggled on defense in the second half but relied on the Big Three to score all of their last 21 points in a 23-8 run which closed the game.

DeMarcus Cousins had 29 points and 14 rebounds for the Kings.

Golden State's Stephen Curry scored 29 points and made a clutch jumper with 13.5 seconds left to give the Warriors a 108-104 overtime win at Cleveland.

The Warriors opened a long road trip with their fifth straight victory, thanks chiefly to Curry, who overcame a poor shooting performance after halftime, and nearly recorded a triple-double by adding 11 assists and nine rebounds. He was just 2 of 12 from the floor in the second half and overtime.

David Lee scored 19 before fouling out for the Warriors, who are on the road for seven games over the next 13 days.

Kyrie Irving scored 27 for Cleveland, which lost its third tight game in a row. The Cavs lost by three in Boston on Saturday and two in double-overtime against Atlanta on Thursday.

Philadelphia's Thaddeus Young scored seven of his 25 points in the fourth quarter to steer the 76ers to a 111-104 victory over the Los Angeles Lakers, ending a run of 13-straight road losses.