Oklahoma City won in the absence of guard Russell Westbrook, who had arthroscopic surgery on his right knee and will be out until after the All-Star break. 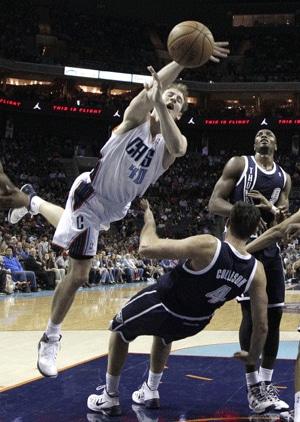 Oklahoma City's Kevin Durant had 34 points and 12 rebounds to power the Thunder to an 89-85 win over Charlotte on Friday, moving level with Portland atop the NBA standings.

Oklahoma City won in the absence of guard Russell Westbrook, who had arthroscopic surgery on his right knee and will be out until after the All-Star break.

Durant scored 14 points in the fourth quarter and finished 14 of 28 from the field while Serge Ibaka had 12 points and nine rebounds for the Thunder, which has won seven straight road games.

The Thunder escaped with a victory after Josh McRoberts missed a wide-open 3-pointer with 3 seconds left.

Golden State's Stephen Curry had career highs of 16 assists and 13 rebounds to go with 14 points, helping the Warriors defeat Phoenix 115-86 and notch a fourth-straight win.

Curry made just one of six 3-point attempts but more than made up for it with his passing and rebounding for his third career triple-double.

P.J. Tucker had 11 points and 12 rebounds to lead the Suns, who suffered their heaviest defeat of the season.

Sacramento's DeMarcus Cousins had 27 points and 17 rebounds for the Kings, who came from 17 points down to beat Miami 108-103 in overtime.

Rudy Gay scored 26 for the Kings, including the tying jump shot in regulation, before the Kings pulled away in the extra period.

LeBron James finished with 33 points, eight rebounds and eight assists for the Heat, which was without Dwyane Wade (rest), Ray Allen (knee tendinitis) and Chris Andersen (sore back).

New Orleans' Tyreke Evans had 19 points and 10 assists to lead the Pelicans to a 105-89 win over Denver, which has lost five straight.

Jrue Holiday had 17 points and four steals, causing two turnovers that led to late fast-break points as the Pelicans slammed the door on Denver's comeback bid.

Wilson Chandler scored 22 points for the Nuggets, who trailed by 18 in the second quarter but got within six points with 2:55 to go.

Minnesota's Kevin Love had 25 points and 11 rebounds to lead the Timberwolves to a 120-98 victory over Washington.

J.J. Barea scored 17 points off the bench for the Timberwolves, who out-rebounded Washington 44-35 and only turned the ball over five times.

John Wall had 26 points and seven assists for the Wizards, who had won their previous three road games.

Utah's Derrick Favors had 18 points and 14 rebounds and made a put-back dunk with 2.1 seconds remaining to lift the Jazz over the depleted Los Angeles Lakers 105-103.

Toronto's Jonas Valanciunas had 16 points and a career-high 18 rebounds to help the Raptors rally to a 95-93 victory over New York.