Rookie from Syracuse Carter-Williams set an NBA record for a debut game with nine steals. 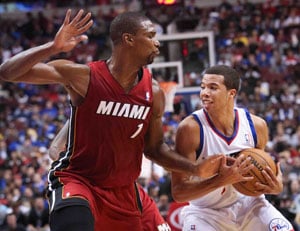 Michael Carter-Williams (right in pic) had an NBA debut to remember, notching 22 points, 12 assists and nine steals to lead the Philadelphia 76ers past the reigning champion Miami Heat 114-110 on Wednesday night.

The rookie out of Syracuse nearly upstaged Allen Iverson on a night Philly celebrated the retired star's spectacular career.

"You see what he can bring on a big stage," 76ers rookie head coach Brett Brown said.

In the fourth quarter, Carter-Williams picked up two steals, harassed LeBron James in the lane and sealed the win from the free-throw line.

"Everything was clicking tonight," Carter-Williams said. "If we can consistently play together, then we can be a good team."

The 76ers-Heat match was one of 14 in the NBA on Wednesday. Some of the highlights: Dwight Howard had 17 points and a career-high-equaling 26 rebounds in his Houston debut as the Rockets beat the Bobcats 96-83; Tony Parker had 13 points and nine assists to help San Antonio get off to a strong start after last season's disappointing loss in the NBA Finals with a 101-94 win over Memphis; and the Timberwolves beat the Magic 120-115, with Kevin Love scoring 31 points, taking 17 rebounds and hitting the game-leveling 3-pointer with 10.2 seconds left to force overtime.

At Philadelphia, Spencer Hawes scored 24 points for the Sixers, who defied expectations to start their season.

As the NBA season tipped off, the over-under out of Las Vegas for total wins for the 76ers this year is 16.5, the lowest of any team in the league.

Against the two-time defending champion Heat, that didn't seem to be bothering anyone in Philly.

Miami guard Dwyane Wade sat out to rest his sore knees. Coach Erik Spoelstra says he wanted to give Wade an extra day to recover with the Heat playing on consecutive nights. Wade scored 13 points for the Heat in their 107-95 win over Chicago on Tuesday.

James missed five of six shots in the fourth quarter, losing the ball on one drive down the middle, then blowing a 6-footer on the next possession. Shane Battier missed all seven 3-pointers in the game and the Heat missed 10 straight shots in the fourth - after scoring a whopping 45 points in the third.

Carter-Williams, meanwhile, set an NBA record for a debut game with nine steals.

"I couldn't think of a better way to start your NBA career," James said of his rival.

Howard celebrated his arrival at Houston with a big game against Charlotte. He spurned the Lakers to sign an $88 million deal with Houston, joining James Harden and a team that made the playoffs last season for the first time since 2009.

The Rockets led by four points in the fourth quarter before using a 14-4 run to extend the lead to 86-72 with about 31/2 minutes left.

Harden tossed an alley-oop to Howard for a dunk during that span. The crowd roared as Howard pointed and smiled at his new teammate.

In other games, Anderson Varejao scored with 28 seconds left to send Cleveland to a 98-94 win over remodeled Brooklyn in coach Mike Brown's first game back with the Cavaliers, the Raptors beat the Celtics 93-87 and the Knicks blew a 25-point lead before holding off the Bucks 90-83, with Carmelo Anthony scoring 19 points and making 10 rebounds.

Kevin Durant scored 22 of his 42 points from the free throw line, including a pair with 6.4 seconds remaining, to lift Oklahoma City to a 101-98 win over the Utah Jazz at Salt Lake City.

The new-look Pistons opened with a 113-102 win over the Wizards, the Pacers rallied to beat the Pelicans 95-90 with George Hill capping a 19-point performance with a pivotal 3-pointer in the final minute, and the Mavericks spoiled Mike Budenholzer's Atlanta coaching debut with a 118-109 win - Monta Ellis started his Dallas career with 32 points and Dirk Nowitzki contributed 24.

Comments
Topics mentioned in this article
Philadelphia 76ers NBA
Get the latest Cricket news, check out the India cricket schedule, Cricket live score . Like us on Facebook or follow us on Twitter for more sports updates. You can also download the NDTV Cricket app for Android or iOS.