The Heat-Pacers clash was the highlight of a day when Minnesota made a powerful start which overwhelmed Portland, San Antonio ended Phoenix's winning streak, and father Doc Rivers got the bragging rights over son Austin Rivers as the Los Angeles Clippers defeated New Orleans. 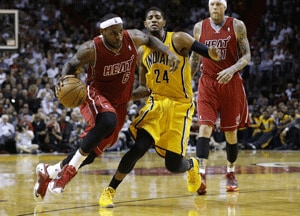 Miami's Ray Allen hit the go-ahead 3-pointer in the final minute as the Heat rallied from a late deficit to beat the Indiana Pacers 97-94 on Wednesday in a clash of NBA divisional leaders.

The Heat-Pacers clash was the highlight of a day when Minnesota made a powerful start which overwhelmed Portland, San Antonio ended Phoenix's winning streak, and father Doc Rivers got the bragging rights over son Austin Rivers as the Los Angeles Clippers defeated New Orleans.

Miami's Dwyane Wade scored 32 points to help the Heat to a victory which moved them within one game of Indiana, which leads the Eastern Conference.

LeBron James set up Allen for the 3-pointer that put Miami in front for good with 59.5 seconds left, capping a 10-0 run.

Paul George scored 25 points for the Pacers but missed a 3-pointer that would have tied it with 4 seconds left.

Down by one, the Pacers saw their best chance go awry when George Hill turned the ball over on a bad pass with 14 seconds left. Allen made two free throws with 10.3 seconds remaining to put Miami up by three, and that capped a big comeback win for the two-time defending NBA champions.

Minnesota's Kevin Love had 29 points, 15 rebounds and nine assists, powering the Timberwolves to a 120-109 win over Portland.

Nikola Pekovic had 30 points and nine rebounds for the Timberwolves, who led by 32 in the second quarter and held off a charge in the second half from the Blazers.

Damian Lillard had 36 points, six assists and six rebounds for the weary Trail Blazers, who were completing a four-game road trip.

San Antonio's Manu Ginobili scored 11 of his 24 points in the final 4-plus minutes, steering the Spurs to a 108-101 win over Phoenix.

Tim Duncan added 17 points and 13 rebounds for the Spurs, who were without injured point guard Tony Parker.

Channing Frye scored 15 of his 22 points in the first quarter for the Suns, who had won their previous five games. They led 95-93 late but Ginobili led San Antonio on a 15-6 scoring run in the closing stages.

Los Angeles' Blake Griffin and DeAndre Jordan each had a double-double as the Clippers beat New Orleans 108-95.

Griffin had 21 points and 10 rebounds before fouling out with 4:05 left, and Jordan added 14 points and 20 boards in the Clippers' third straight victory.

Anthony Davis led the Pelicans with 24 points and 12 rebounds in his return from a broken hand. Austin Rivers, the son of Clippers coach Doc Rivers, had two points in a reserve role for the Pelicans.

Houston made a big third-quarter run which set up a 109-94 win over Chicago.

Dwight Howard scored 23 points and James Harden and Chandler Parsons added 19 each for the Rockets, who made a 15-1 scoring spurt late in the third to take a grip on the previously close contest.

Jimmy Butler's 20 points led the Bulls, who have dropped three in a row.

Dallas' Dirk Nowitzki scored 20 points in his return to the lineup after a stomach virus, helping the Mavericks beat undermanned Memphis 105-88.

Monta Ellis scored 16 of his 18 points in the second half for Dallas while Nowitzki added six rebounds, five assists, two steals and one blocked shot.

Memphis slumped to a fifth-straight defeat, with the latest coming without injured trio Tayshaun Prince, Mike Conley and Marc Gasol.

Detroit's Brandon Jennings led Detroit to a 107-106 win over Boston, scoring 28 points and matching his season high with 14 assists.

Atlanta's Kyle Korver made seven consecutive 3-point attempts on his way to a season-high 28 points, pushing the Hawks to a 124-107 victory over Sacramento.

Charlotte's Kemba Walker hit a buzzer-beating jumper in overtime, giving the Bobcats a 104-102 win over Toronto.

Washington's John Wall scored 21 points and made two big defensive plays against in the closing moments to lead the Wizards to a 113-107 victory over Brooklyn.

Utah's Trey Burke had a career-high 30 points and eight assists, leading the Jazz to an 86-82 win at Orlando.

Comments
Topics mentioned in this article
NBA Ray Allen
Get the latest Cricket news, check out the India cricket schedule, Cricket live score . Like us on Facebook or follow us on Twitter for more sports updates. You can also download the NDTV Cricket app for Android or iOS.