Paul George had 24 points and nine rebounds and Lance Stephenson added 16 points, leading the Indiana Pacers to a 114-81 rout of the Houston Rockets, while Evan Turner hit the winning basket at the buzzer and scored 29 points to lead the Philadelphia 76ers to a 121-120 overtime win over the Brooklyn Nets. 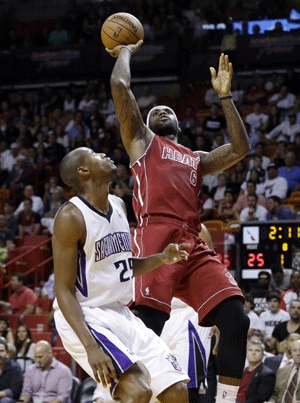 Chris Bosh scored 25 points, Dwyane Wade added 20 and the Miami Heat put up a season high for points, rolling past the Sacramento Kings 122-103 on Friday.

Paul George had 24 points and nine rebounds and Lance Stephenson added 16 points, leading the Indiana Pacers to a 114-81 rout of the Houston Rockets, while Evan Turner hit the winning basket at the buzzer and scored 29 points to lead the Philadelphia 76ers to a 121-120 overtime win over the Brooklyn Nets.

In Miami, LeBron James joined the party with 18 points, eight assists and six rebounds while sitting out the fourth quarter for Miami, which has won four straight overall and 18 of its last 19 against the Kings.

Ray Allen added 18 and Mario Chalmers scored 16 for the Heat, who shot 61 percent.

DeMarcus Cousins led Sacramento with 27 points and eight rebounds in 32 minutes. Ben McLemore scored 20 and Rudy Gay added 14 for Sacramento, which has now dropped the first three games of its four-game trip.

Jason Thompson and Isaiah Thomas each scored 11 for the Kings, who shot 58 percent - the second-best shooting effort by a losing team in the NBA this season.

The tone for a defense-challenged night was set early.

Back and forth, neither team seeming all that interested in stopping the other. The Heat had 29 baskets in the first half; 21 were either dunks, layups or tip-ins. There were 10 ties and nine lead changes in the half, one where no team ever led by more than seven.

By halftime, it was the Kings leading Miami 67-61, but things got away from the Kings in the third.

Bosh, James, Wade and Shane Battier combined for 22 points on 9 for 14 shooting and Miami outscored Sacramento 31-21 in the third, building a 98-82 edge to take into the fourth. The Kings had five turnovers in that quarter, and Miami turned them into 11 points.

In Indianapolis, the Pacers ended their only two-game losing streak of the season and maintained their grip on the Eastern Conference's best record (21-5) with their most lopsided win of the season.

Dwight Howard finished with 19 points, 12 rebounds and five blocks for the Rockets. James Harden, the NBA's No. 6 scorer, was held in check most of the night by George, finishing with 12 points on 3-of-14 shooting.

Former Indiana All-Star Danny Granger received a standing ovation when he made his season debut late in the first quarter and fans chanted his name when he made his first basket, a 3-pointer, early in the fourth.

In Philadelphia, Paul Pierce hit a 3-pointer with 16.9 seconds left in OT to give the Nets the short-lived lead, but Turner, sensational all game, drove past a pair of defenders and tossed up the last-gasp shot. The ball bounced three times around the rim before it dropped through the net. After a brief review, the bucket stood, Turner was mobbed by his teammates and the Sixers snapped a seven-game losing streak.

In other games Friday, the Charlotte Bobcats beat the Detroit Pistons 116-106, the Atlanta Hawks thrashed the Utah Jazz 118-85 and the Cleveland Cavaliers edged the Milwaukee Bucks 114-111 in overtime.