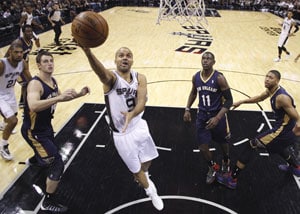 Manu Ginobili had 16 points to lead seven players in double figures as the San Antonio Spurs beat the New Orleans Pelicans 112-93 on Monday for their 11th straight victory.

Ryan Anderson had 17 points, Tyreke Evans and Jrue Holiday each added 12 points and Anthony Davis had 10 for New Orleans (6-7).

Portland's LaMarcus Aldridge had 18 points and 14 rebounds for his seventh double-double this season as the Trail Blazers beat the slumping New York Knicks 102-91 for their 11th straight victory.

Utah's Trey Burke made a key 3-pointer to help the Jazz outlast Chicago 89-83 in overtime - the Bulls' first game since learning Derrick Rose would again be lost for the season.

Burke, a rookie finally enjoying extensive playing time after spending most of the season recovering from finger surgery, had 14 points and six assists. He also had five turnovers and shot 5 for 17 but was on the court in clutch time directing the Jazz to their second win of the season.

Carlos Boozer had 26 points and 16 rebounds and Luol Deng added 24 points for the Bulls.

At Indianapolis, George Hill scored a season-high 26 points, and Paul George had 11 of his 26 points during the decisive run to lead the Indiana Pacers to a 98-84 victory over the Minnesota Timberwolves.

Indiana has won four straight since losing at Chicago, is 13-1 for the first time in club history and remained perfect in eight home games this season.

The Boston Celtics beat the Charlotte Bobcats 96-86 for their second straight victory after Jordan Crawford had 21 points and reserve Gerald Wallace added a season-high 17 points.

LeBron James scored 35 points on only 14 shots from the field and Dwyane Wade added 21 points and 12 assists to lead the Miami Heat over the Phoenix Suns 107-92 for their seventh straight win.

In other games, the Houston Rockets downed the Memphis Grizzlies 93-86, the Denver Nuggets defeated the Dallas Mavericks 110-96 and the Detroit Pistons were 113-94 winners over the Milwaukee Bucks.