The result moved the Clippers 3 games clear atop the Pacific Division, while the Thunder's lead in the Northwest was trimmed to 4-1/2 games ahead of Portland, which staged a creditable comeback win over Minnesota despite being without leading scorer LaMarcus Aldridge. 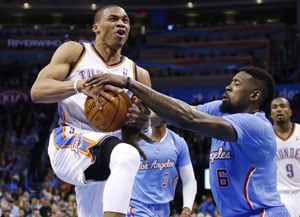 The Los Angeles Clippers showed they are a strong contender for the NBA Western Conference title by winning 125-117 at Conference leader Oklahoma City on Sunday, with Jamal Crawford scoring 36 points.

The result moved the Clippers 3 games clear atop the Pacific Division, while the Thunder's lead in the Northwest was trimmed to 4-1/2 games ahead of Portland, which staged a creditable comeback win over Minnesota despite being without leading scorer LaMarcus Aldridge.

Among other key results, Houston edged Phoenix with a last-gasp 3-pointer, and Miami comfortably beat Chicago even without an injured LeBron James.

The Clippers recorded the highest score of any team against Oklahoma City this season, with Matt Barnes contributing 24 points.

Oklahoma City overcame a 15-point deficit late in the third quarter to take a 115-112 lead with 2:43 to play, but the Clippers controlled the game from there.

Kevin Durant had 42 points and 10 assists for the Thunder, which has been unable to rekindle momentum since the All-Star break.

Houston moved within 2 games of the Southwest Division lead by pipping Phoenix 115-112, with Patrick Beverley sinking the go-ahead 3-pointer with 34.3 seconds left.

Dragic scored a career-high 35 points for the Suns, but missed a 3 at the buzzer.

Dwight Howard scored 25 for the Rockets, who trailed by 10 entering the fourth quarter.

Miami beat Chicago 93-79, with Chris Bosh and Dwyane Wade making up for the absence of James, who broke his nose in Thursday's win at Oklahoma City.

Bosh had 28 points and 10 rebounds, and Wade added 23 points, 10 rebounds and seven assists to help the Heat to victory in their first home game for three weeks.

Joakim Noah had 20 points, 15 rebounds and four blocks for Chicago, which had won five in a row. The Bulls shot 36 percent.

Portland's Damian Lillard had 32 points to lead the undermanned Trail Blazers to a 108=97 victory over Minnesota, having trailed by 18 points in the first half.

Thomas Robinson had 14 points and a career-high 18 rebounds for Portland, which was without Aldridge for a third-straight game due to a groin injury.

Kevin Love scored 31 for Minnesota, which had won three in a row. It was Love's franchise-best fifth straight game with 30 or more points.

Washington won 96-83 at Cleveland to strengthen its hold on fifth place in the East, with John Wall scoring 21 points.

Brooklyn signing Jason Collins played his first game with the Nets - becoming the first openly gay player in the four major U.S. professional sports leagues - and contributed to a 108-102 victory over the Los Angeles Lakers.

Sacramento won at Denver for the first time in six years, beating the Nuggets 109-95, with Isaiah Thomas scoring 33 points.