Dwyane Wade added 24 points and Chris Bosh had 22 for the Heat, who squandered a 19-point third-quarter lead and rallied from a two-point deficit with eight unanswered points late in the fourth quarter. 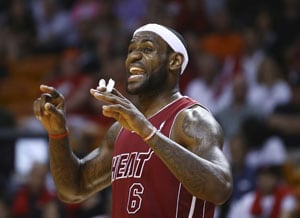 LeBron James scored 25 points against his former team, leading the Miami Heat to a 114-107 victory over the Cleveland Cavaliers in the NBA on Saturday.

Dwyane Wade added 24 points and Chris Bosh had 22 for the Heat, who squandered a 19-point third-quarter lead and rallied from a two-point deficit with eight unanswered points late in the fourth quarter.

Kyrie Irving scored 19 points for the Cavaliers, who played the second half without coach Mike Brown. He was ejected late in the second quarter after he stormed onto the court looking for a foul on Shane Battier's block of Alonzo Gee's layup.

In other games, the Portland Trail Blazers became the second NBA team to reach 20 wins after beating the Philadelphia 76ers 139-105. The Los Angeles Lakers also won their first game since Kobe Bryant returned to the lineup from injury, topping the Charlotte Bobcats 88-85, while their crosstown rivals, the Clippers, beat the Washington Wizards 113-97.

LaMarcus Aldridge had 20 points and 16 rebounds and Nicolas Batum added 17 points for Portland, which set a franchise record for 3-pointers with 21.

Damian Lillard scored 16 and Dorell Wright had 15 on 5-for-5 shooting from beyond the arc for the Northwest Division leaders, who won their third in a row and improved to 20-4. They have the second-best record in the NBA after the Indiana Pacers (20-3).

Bryant scored a season-high 21 points for his first win since returning from a torn Achilles tendon four games ago.

Bryant was 8 of 15 from the field and hit two free throws with 37 seconds left to put the Lakers ahead for good after they trailed most of the game. Pau Gasol and Jordan Hill had 15 points apiece for Los Angeles.

John Wall had 24 points and 12 assists for the Wizards, who were without Brazilian forward Nene again due to a foot injury. Washington has lost seven in a row when Nene doesn't play and is 3-24 without him since the beginning of last season.

Elsewhere in the league, San Antonio's Tim Duncan continued his run of good form, scoring 22 points and grabbing 12 rebounds in the Spurs' 100-84 win over the Utah Jazz.

After a slow start to the season, the 37-year-old Duncan is averaging 17 points and 13 rebounds over his last six games. Tony Parker scored 15 points and Kawhi Leonard added 13 for the Spurs.

New York's Carmelo Anthony scored 35 points and Andrea Bargnani added 23 as the Knicks pulled away in the fourth quarter to beat the Atlanta Hawks 111-106.

The Hawks committed 27 turnovers - most in the NBA this season - that led to 36 points by the Knicks and negated their 60.6 percent shooting.

In Dallas, Brandan Wright scored 19 points in his season debut and Jose Calderon had 18 as the Mavericks shrugged off the absence of Dirk Nowitzki and coach Rick Carlisle to beat the Milwaukee Bucks 106-93.

Nowitzki and Carlisle missed the game with an undisclosed illness. Carlisle has been fighting an upper respiratory problem since before a four-game road trip that started last week.