All five Miami starters sat out the fourth quarter for the second straight night, and Dwyane Wade sat out the whole way game again to give his knees more rest. 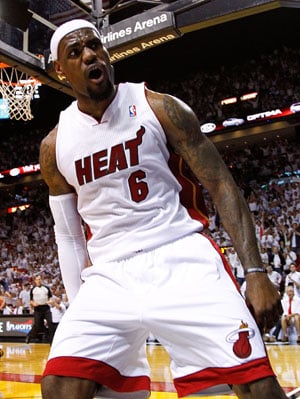 LeBron James had 21 points and seven assists, and Chris Bosh scored 18 as the Miami Heat beat the Orlando Magic 120-92 on Wednesday for their fifth straight victory.

James Jones scored 14 of his 17 points in the third quarter, when the Heat turned what was a five-point game into a runaway.

All five Miami starters sat out the fourth quarter for the second straight night, and Dwyane Wade sat out the whole way game again to give his knees more rest.

Arron Afflalo scored 20 of his 30 points in the first half for Orlando and went 7 of 9 from 3-point range. Victor Oladipo added 20 points but had eight turnovers.

Indiana's Paul George made three free throws to level the game with 5.2 seconds left in regulation, then scored nine of his season-high 35 points in overtime as the Pacers downed the Knicks 103-96 for New York's sixth straight defeat at home.

New York scored the first 13 points, but this settled into a playoff-type game between teams that met in the postseason last May. And it again went to the Pacers, who bounced back from their first loss after a franchise-record 9-0 start.

George Hill added 23 points and eight rebounds for the Pacers.

Anthony had 30 points and 18 rebounds for the Knicks.

At Dallas, Monta Ellis had a season-high 37 points and assisted on the go-ahead basket as the Mavericks spoiled Dwight Howard's best offensive night in Houston's 123-120 loss.

Dallas was down one when Ellis drove and zipped a pass to Shawn Marion in the corner for the go-ahead 3-pointer with 47 seconds left.

Dirk Nowitzki finished with a season-high 35, including 14 in the fourth, and passed Reggie Miller for 15th on the NBA scoring list. Nowitzki has 25,298 points, 18 ahead of Miller.

Wesley Matthews had 15 points, all in the first half, to help Portland complete a sweep of a four-game Eastern Conference road trip. The Trail Blazers have won 10 of 12 to start the season.

Tony Parker scored 19 points as the San Antonio Spurs beat the Boston Celtics 104-93 to win their eighth straight overall and remain undefeated at home, while DeMar DeRozan scored 33 points to help the Toronto Raptors down the Philadelphia Phillies 108-98.

The Washington Wizards beat the Cleveland Cavaliers 98-91 thanks to Bradley Beal's 26 points and Nene's 24, and Kemba Walker scored a season-high 31 points to lead the Charlotte Bobcats over the Brooklyn Nets 95-91.

In other games, the Atlanta Hawks downed the Detroit Pistons 93-85, the Los Angeles Clippers defeated the Minnesota Timberwolves 102-98, the New Orleans Pelicans were 105-98 winners over the Utah Jazz, the Memphis Grizzlies overcame the Golden State Warriors 88-81 in overtime and the Los Angeles Kings had a 113-106 victory over the Phoenix Suns.