Portland, which also got 16 points and 10 rebounds from Robin Lopez, led by 10 points early in the fourth quarter, but Houston closed that to two with 4:45 to go. 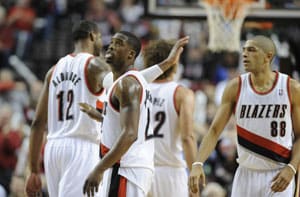 Portland's LaMarcus Aldridge put in a superb individual performance, scoring 31 points and having a career-high 25 rebounds, to power the Western Conference-leading Trail Blazers to a 111-104 win over Houston on Thursday,

In the day's other game, Brooklyn beat the Los Angeles Clippers to give Paul Pierce and Kevin Garnett a victory over their old Boston coach Doc Rivers.

Portland, which also got 16 points and 10 rebounds from Robin Lopez, led by 10 points early in the fourth quarter, but Houston closed that to two with 4:45 to go.

Nicolas Batum's 3-pointer pushed Portland's lead to 102-95 before Wesley Matthews' layup and free throw made it 108-96 with 2:04 left and effectively ended the contest.

Dwight Howard had 32 points and 17 rebounds for the Rockets, who five weeks ago inflicted on of only two home defeats suffered this season by the Blazers.

Rockets coach Kevin McHale was not with the team because of the death of his mother, with assistant Kelvin Sampson filling in.

Brooklyn's Andray Blatche and Joe Johnson each scored 21 points in the Nets' 102-93 victory over the Clippers.

Brook Lopez had 16 points for the Nets, who won their season-high third straight.

Chris Paul scored 20 points but had just two assists. It was the first time this season the Clippers had lost when he had scored at least 20 points.

Pierce and Garnett won both games of clashes with old Bostonians this week, beating the Celtics on Tuesday then getting better of Rivers.