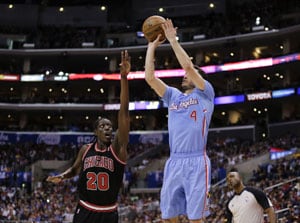 Jared Dudley scored a season-high 21 points and Chris Paul added 16 points and 17 assists as the Los Angeles Clippers played all over the Chicago Bulls in Derrick Rose's absence for a 121-82 victory.

Los Angeles finished strong in a stretch of four games in five days, posting the biggest margin of victory over Chicago in club history.

Luol Deng scored 22 points as the Bulls got off to a rough start to their latest stretch without Rose, who tore cartilage in his right knee Friday night in Portland.

Lakers reserve forward Xavier Henry scored 12 of his 21 points in the fourth quarter and Pau Gasol had 20 points and 10 rebounds to lead Los Angeles over the Sacramento Kings 100-86.

Steve Blake finished with 12 assists, nine points and five rebounds. Blake, who has started all 14 games for the Lakers at point guard in place of the injured Steve Nash, has recorded double digits in assists in each of the last five.

At Oklahoma City, Kevin Durant scored 19 points and Serge Ibaka had 17 points and 11 rebounds to the Thunder extend its best season-opening start at home with a 95-73 win over the struggling Utah Jazz.

The Thunder (9-3) played without All-Star point guard Russell Westbrook, who sat out to rest his surgically repaired right knee.

The Detroit Pistons sent the Brooklyn Nets to a fifth straight loss and sole possession of last place in the Atlantic Division with a 109-97 win, while Goran Dragic scored 23 points and Gerald Green added 20 to lead the Phoenix Suns over the Orlando Magic 104-96.

Comments
Topics mentioned in this article
NBA Lionel Messi Los Angeles Clippers
Get the latest Cricket news, check out the India cricket schedule, Cricket live score . Like us on Facebook or follow us on Twitter for more sports updates. You can also download the NDTV Cricket app for Android or iOS.