NBA: Indiana Pacers beat the Miami Heat to prove their worth 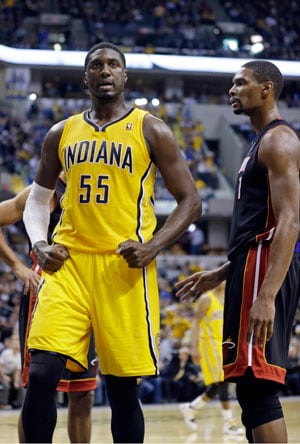 Indiana showed it is a legitimate challenger to Miami for the NBA Eastern Conference crown by beating the Heat 90-84 on Tuesday, pulling off an impressive second-half rally in a clash of the East's top two teams.

Among the day's other games, Oklahoma City made it 11 wins from 12 games by beating Atlanta, San Antonio recovered from a big early deficit to run down Toronto, and Phoenix was too good for the Los Angeles Lakers even with Kobe Bryant getting back near his old self.

Indiana improved its league-best record to 19-3 and extended its lead to three full games by beating Miami at home for the fourth straight time.

LeBron James had 17 points, 14 rebounds and six assists for the Heat - which now trails Indiana by three games - but had only three baskets and nine points over the final 36 minutes.

Oklahoma City's Kevin Durant scored 30 points to lead the Thunder to a 101-92 win over Atlanta.

Coming off an impressive home victory over Indiana, the Thunder had more trouble on the road against the Hawks. But the result was the same: another Oklahoma City victory, despite a tough night for Russell Westbrook who was held to 14 points on 6-of-21 shooting.

San Antonio's Manu Ginobili scored 16 points and Tony Parker had 15 as the Spurs beat Toronto 116-103 to make it six straight wins over the Raptors.

DeMar DeRozan scored 19 points for the Raptors, who lost for the sixth time in seven games.

Phoenix's Goran Dragic scored 31 points to power the Suns to a 114-108 win over the Lakers.

Kobe Bryant led the Lakers with 20 points while playing 29 mostly sharp minutes in his second game back from a nearly eight-month absence with a torn Achilles tendon. He led a fourth-quarter rally by the Lakers, who got within four points with 3 minutes left before Phoenix held on for its first three-game winning streak of the season.

Marcus Morris scored 22 points for the Suns, who never trailed after the opening minutes.

Minnesota's Kevin Love had 26 points and 16 rebounds to lead the Timberwolves to 121-94 thumping of Detroit.

Brooklyn's Deron Williams scored a season-high 25 points in his return to the lineup as the Nets beat Boston 104-96 in the first matchup for Paul Pierce and Kevin Garnett against their former team.

Cleveland's Kyrie Irving scored 37 points to lead the Cavaliers to a 109-94 victory over sinking New York.

Milwaukee's John Henson had 25 points, 14 rebounds and six blocked shots to help the Bucks beat Chicago 78-74 in a clash of two struggling and injury-riddled teams.

Comments
Topics mentioned in this article
NBA Roy Hibbert
Get the latest Cricket news, check out the India cricket schedule, Cricket live score . Like us on Facebook or follow us on Twitter for more sports updates. You can also download the NDTV Cricket app for Android or iOS.