The Pacers became the first team since the 2002-03 Dallas Mavericks to open a season 9-0. Indiana has already beaten all four of its Central Division foes. 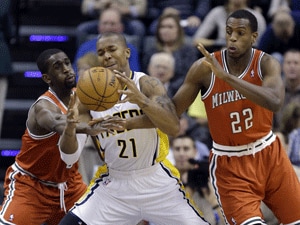 Indiana improved its perfect start to the new season to 9-0 by cruising past Milwaukee 104-77 on Friday, with Roy Hibbert having 24 points and eight blocks.

The Pacers became the first team since the 2002-03 Dallas Mavericks to open a season 9-0. Indiana has already beaten all four of its Central Division foes.

Among other games, LeBron James led Miami past Dallas, Joe Johnson shone in the key moments as Brooklyn beat Phoenix in overtime, and Chicago beat Toronto for its first road win of the season.

Indiana's Hibbert had plenty of help. Paul George scored 10 of his 22 points in the third quarter and Lance Stephenson finished with 11 points.

The Bucks, who were missing four injured players, were led by O.J. Mayo's 20 points but they never looked likely to avoid a fourth-straight loss.

James made 14 of 18 shots for the Heat, which has topped the 100-point mark in every game this season.

Wade became the second player in Heat history with at least eight steals and eight assists in a game; Tim Hardaway did it against Atlanta in 1997-98.

Dirk Nowitzki scored 28 points to lead Dallas, which turned the ball over 24 times.

Brooklyn's Joe Johnson tied the game in regulation, trapped a loose ball in overtime and then dropped in a basket as time expired to give the Nets a 100-98 win over Phoenix.

Johnson with 13 points on 6-of-19 shooting and Brook Lopez scored 25 of his 27 points for Brooklyn in the second half and overtime.

P.J. Tucker scored 15 of his 17 points in the fourth quarter and overtime for the Suns, who had been undefeated at home in four previous games.

Chicago overcame the absence of the injured Derrick Rose to beat Toronto 96-80.

Luol Deng had 19 points and Joakim Noah scored 18 for the Bulls, who have won three straight.

DeMar DeRozan matched his career high with 37 points but was the only Raptor in double figures.

Portland's LaMarcus Aldridge scored 27 points and added 12 rebounds to lead the TrailBlazers to a 109 win over the Celtics; their first victory in Boston since 2004.

Jared Sullinger, who missed the last game with a bruised knee, had 26 points and eight rebounds off the bench for Boston.

Charlotte's Michael Kidd-Gilchrist scored 16 points as the Bobcats used a strong fourth quarter to win 86-80 at Cleveland; only their second vioctory in 16 games at Quicken Loans Arena.

The Bobcats outscored the Cavaliers 29-22 in the final period.

Kyrie Irving, wearing a mask to protect a nasal fracture, had 18 points and 10 assists for Cleveland, which lost for the first time in four games at home.

Memphis' Zack Randolph scored 14 of his 28 points in the fourth quarter and grabbed 11 rebounds as the Grizzlies beat the Los Angeles Lakers 89-86.

Denver's Wilson Chandler scored 19 points, including a big 3-pointer and three free throws late in the game, as the Nuggets held off Minnesota 117-113 for its third straight win.

Detroit's Josh Smith had 21 points, eight rebounds and seven assists, as the Pistons snapped a four-game skid by beating Sacramento.

San Antonio's Tony Parker scored 14 of his 22 points in the fourth quarter to guide the Spurs to a 91-82 win over Utah, extendings its winning streak to seven games.

Atlanta's Jeff Teague had a career-high 33 points and 10 assists as the Hawks beat Philadelphia 113-103.

Comments
Topics mentioned in this article
Roy Hibbert NBA
Get the latest Cricket news, check out the India cricket schedule, Cricket live score . Like us on Facebook or follow us on Twitter for more sports updates. You can also download the NDTV Cricket app for Android or iOS.