Among the day's other games, Jeff Green's buzzer-beating 3-pointer lifted Boston over Miami, Cleveland also won a nail-biter by downing Philadelphia in double overtime, and the Los Angeles Clippers surged past Houston in the second half. 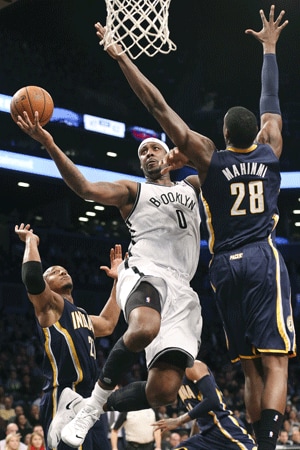 Indiana recorded the best season start in franchise history by improving to 7-0 with a 96-91 win over Brooklyn on Saturday.

Among the day's other games, Jeff Green's buzzer-beating 3-pointer lifted Boston over Miami, Cleveland also won a nail-biter by downing Philadelphia in double overtime, and the Los Angeles Clippers surged past Houston in the second half.

David West added 18 points and hit the clinching free throws for the Pacers, who had won their first six games in 1970-71, when they played in the ABA. They have the longest winning streak to open an NBA season since both the Lakers and New Orleans were 8-0 in 2010-11, according to STATS.

Deron Williams and Joe Johnson each had 17 points for the Nets, who lost at home for the first time this season.

Boston's Jeff Green received a pass from Gerald Wallace in the right corner and unleashed his long shot over the hands of LeBron James for a memorable winner - which stood up after a video review - in the 111-110 victory over Miami.

Green finished with 24 points and was 5 of 8 on 3-pointers. Avery Bradley scored 17 points for the Celtics.

Cleveland's Kyrie Irving scored a season-high 39 points and hit the winning layup with 0.6 seconds remaining in the second overtime to lift the Cavaliers to a 127--125 win over Philadelphia.

The Cavaliers called time out with 11.3 seconds remaining in the second overtime and the scores tied. Irving, who missed potential game-winning shots at the end of regulation and the first overtime, took the inbounds pass, avoided a double team near the top of the key, drove the lane and scored on a left-handed lay-in.

Philadelphia called timeout, but the inbounds pass went out of bounds.

Evan Turner, whose basket tied the game at the end of first overtime, led the Sixers with 31 points.

Los Angeles' Blake Griffin and J.J. Redick scored 22 points apiece as the Clippers used an 18-0 run in the second half to rally for a 107-94 victory over Houston.

Dwight Howard had 21 points and eight rebounds for the Rockets, but was just 5 for 11 on free throws.

Portland's LaMarcus Aldridge had 22 points and 14 rebounds to lead the Trail Blazers to a 96-85 win over Sacramento.

DeMarcus Cousins had 15 of his 33 points in the fourth quarter and also grabbed 12 rebounds to lead the Kings, who have lost five straight since winning their season-opener.

Dallas' Monta Ellis got the best of his former team, shaking off boos from the crowd while contributing 18 points and five assists to help the Mavericks hold off Milwaukee 91-83.

Memphis' Zach Randolph had 23 points and 11 rebounds, and six Grizzlies reached double figures in the 108-90 rout of Golden State.