In the day's other important games, Minnesota also held strong at the finish to win at Dallas, the much-improved Washington downed Atlanta, and Brooklyn deepened Memphis' home-court woes. 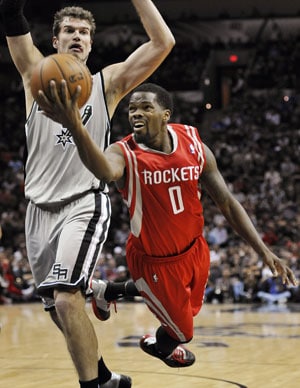 Houston held on against San Antonio's furious second-half rally to beat the Spurs 112-106 on Saturday, closing the gap between the Southwest Division rivals to 1-1/2 games.

In the day's other important games, Minnesota also held strong at the finish to win at Dallas, the much-improved Washington downed Atlanta, and Brooklyn deepened Memphis' home-court woes.

Tony Parker had 27 points for the Spurs, who have lost two of three after a 13-1 start.

The hosts outscored Houston 39-26 to open the second half but could not make up the entire deficit.

Kevin Love had his usual double-double for the Timberwolves, who snapped a three-game losing streak.

Martin made two free throws with just under six minutes left to put Minnesota up 94-90. Ricky Rubio then had a steal that led to a long fast-break jumper by Martin, who later beat the shot clock with a jumper and then added a 3-pointer. That stretched the lead to 103-92, matching its largest, with 3:12 left.

All five starters scored in double figures for Minnesota, which had lost five of its previous six games.

Trevor Ariza scored 24 points and made five 3-pointers for the Wizards, who finished with eight wins in November for the first time in 29 years.

Paul Millsap had 23 points and 10 rebounds for Atlanta, which cut an 18-point, third-quarter deficit to two with 9:42 left, but could not get closer.

Brooklyn's Joe Johnson scored 26 points to lead the Nets to a 97-88 win over Memphis.

Quincy Pondexter returned after missing two games to score a career-high 22 points for the Grizzlies, who have lost four in a row at home.

Cleveland's Andrew Bynum and Dion Waiters each scored 20 points as the Cavaliers held off a late rally and beat Chicago 97-93.

Utah rookie Trey Burke had the biggest game of his NBA career, scoring 20 points to lead seven Utah players in double figures as the Jazz defeated Phoenix 112-104 to post their first road victory of the season.

Milwaukee ended an 11-game losing skid by beating Boston 92-85, with O.J. Mayo rebounding from a poor game by scoring 22 points to lead the Bucks.