Hayward went 13 for 16 from the field and had 11 rebounds and seven assists for the Jazz. After the Thunder sliced a 24-point Jazz lead to 99-94, he made five straight jumpers — two of them 3-pointers — in his personal 17-7 run to clinch Utah's fourth straight home win. 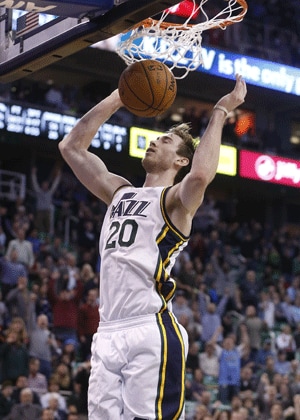 Gordon Hayward scored a career-high 37 points, including Utah's final 17 points, to help the Jazz overcome Kevin Durant's 48 points and beat the Oklahoma City Thunder 112-101 in the NBA on Tuesday.

In other games around the league, the Golden State Warriors beat the Milwaukee Bucks 101-80 for their 10th straight win, the struggling Sacramento Kings surprised the Portland Trail Blazers with a 123-119 victory at home, and Cleveland and Chicago both won games after a Monday night trade sent Luol Deng to the Cavaliers for center Andrew Bynum.

Hayward went 13 for 16 from the field and had 11 rebounds and seven assists for the Jazz. After the Thunder sliced a 24-point Jazz lead to 99-94, he made five straight jumpers - two of them 3-pointers - in his personal 17-7 run to clinch Utah's fourth straight home win.

Durant matched this season's NBA-high scoring total, which he set against the Timberwolves on Saturday.

The Warriors' 10-game winning streak is their longest since their NBA-title season in 1975.

The Warriors, playing their sixth game of a seven-city trip, led by just two at the half against the Bucks, who have the NBA's worst record. Golden State broke open the game with a 23-7 run to start the third quarter.

Sacramento's DeMarcus Cousins had 35 points and 13 rebounds and Rudy Gay scored 32 points as the Kings held off a furious rally to beat the Trail Blazers.

Cousins and Gay provided the spark for a 32-12 run starting at the end of the third quarter that put Sacramento ahead by 19 points.

Damian Lillard scored 26 of his 41 points in the final period to pull Portland within two in the final minute. But the Kings made just enough free throws to hold off the Blazers, who have lost four of their last six games.

Meanwhile, a big trade didn't seem to throw off the Cavaliers or Bulls, who both recorded victories. Cleveland beat the Philadelphia 76ers 111-93, while Chicago topped the Phoenix Suns 92-87.

Chicago dealt Deng to Cleveland late Monday night in exchange for Bynum, who was immediately waived by the Bulls, and future draft picks.

C.J. Miles also set a team record with 10 3-pointers and scored a season-high 34 points to lead the Cavs to a rare easy win.

Short-handed Chicago was led by Taj Gibson's 19 points and 10 rebounds and Joakim Noah's 14 points and 16 rebounds. The Bulls won for the sixth time in their last eight games.

Elsewhere, San Antonio's Manu Ginobili scored on a driving layup with 1.8 seconds left in overtime to lift the Spurs to a 110-108 road win over the Memphis Grizzlies.

Memphis trailed by 16 with five minutes left in regulation, and then used a 23-7 run to force overtime. Mike Conley hit a runner at the end of regulation after Ginobili had scored on a layup.

The Miami Heat rallied from an 11-point deficit in the third quarter to defeat the New Orleans Pelicans 107-88. LeBron James scored 32 points and Dwyane Wade had 22 to power Miami to the win.

Indiana's Roy Hibbert scored 22 points to help the Pacers top the Toronto Raptors 86-79 for their third consecutive win. Toronto has lost two on the road after winning four straight, including a victory over the Pacers last week at home.

Dirk Nowitzki scored 27 points for the Mavericks, who had lost four straight at home. Los Angeles lost for the eighth time in nine games.

Denver's Randy Foye scored a season-high 23 points, connecting on seven 3-pointers, as the Nuggets routed the Boston Celtics 129-98 for their third straight win after an eight-game losing streak.

The Washington Wizards got 21 points from Bradley Beal to defeat the Charlotte Bobcats 97-83. The Bobcats lost for the sixth time in seven games.

Comments
Topics mentioned in this article
NBA Gordon Hayward C.J. Miles Cleveland Cavaliers Los Angeles Lakers Utah Jazz Al Jefferson
Get the latest updates on ICC T20 Worldcup 2022, check out the Schedule and Live Score. Like us on Facebook or follow us on Twitter for more sports updates. You can also download the NDTV Cricket app for Android or iOS.