The Raptors have won eight of 10 games since December 13, when the majority of the players acquired from Sacramento in the Rudy Gay trade made their Toronto debuts. 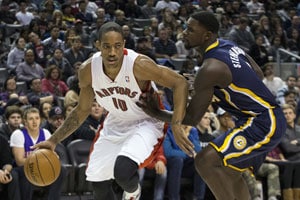 DeMar DeRozan scored 26 points and Kyle Lowry had 13 points and a season-high 14 assists as the resurgent Toronto Raptors extended their season-best winning streak to four games by beating the Indiana Pacers 95-82 in the NBA on Wednesday.

Terrence Ross scored 18 points and Jonas Valanciunas had 13 points and nine rebounds as the Raptors (15-15) ended Indiana's five-game winning streak and improved their record to .500 after 30 games for the first time since Jan. 6, 2010.

The Raptors have won eight of 10 games since December 13, when the majority of the players acquired from Sacramento in the Rudy Gay trade made their Toronto debuts.

Roy Hibbert fouled out with 16 points and Paul George had 12 for the Pacers, who recorded a season-worst 23 turnovers. Indiana had won nine of its previous 12 meetings with Toronto, including four straight in Canada.

In other games Wednesday, the Los Angeles Clippers handed the Charlotte Bobcats their 17th straight road loss against Western Conference opponents in a 112-85 rout, the Philadelphia 76ers defeated the slumping Denver Nuggets 114-102, the Dallas Mavericks held off the Washington Wizards 87-78 and the Minnesota Timberwolves beat the New Orleans Pelicans 124-112.

Blake Griffin scored 13 of his 31 points in the final 7:05 and Jared Dudley got 11 of his 20 points in the third quarter for the Pacific Division-leading Clippers.

Dudley faced his second former team in two games, making seven of 10 shots against the club that selected him with their first pick in the 2007 NBA draft and traded him to Phoenix after one season. He had nine points against the Suns on Monday in the Clippers' 107-88 loss.

Chris Paul had 17 points and 14 assists for the Clippers, who beat the Bobcats for the sixth straight time.

The 76ers won their second straight game away from home, days after beating the Los Angeles Lakers to halt a 13-game road losing streak.

J.J. Hickson had 19 points and 11 rebounds for the Nuggets, who dropped their eighth game in a row. It's the team's longest skid since losing the final eight games of the 2002-03 season.

The Wizards led 74-70 with 4:58 to play, but the Mavericks scored nine straight points on a 3-pointer by Vince Carter, a hook shoot by Brandan Wright, two free throws by Carter and a jumper by Monta Ellis.

Washington didn't score again until John Wall, who led the Wizards with 22 points, made two free throws with 46 seconds to play.

Ellis finished with 23 points and Carter had 13.

Minnesota shot 55.7 percent and forced a season-high 18 turnovers from the Pelicans to cruise to victory.

Nikola Pekovic had 22 points and seven rebounds, Kevin Love had 21 points and six rebounds and Ricky Rubio had 14 points, nine assists, eight rebounds and three steals for the Timberwolves (16-16), which needed a win over New Orleans (14-16) in the jockeying for position in the tough Western Conference.

Comments
Topics mentioned in this article
NBA Toronto Raptors
Get the latest Cricket news, check out the India cricket schedule, Cricket live score . Like us on Facebook or follow us on Twitter for more sports updates. You can also download the NDTV Cricket app for Android or iOS.