Los Angeles Clippers' owner Donald Sterling allegedly made racist remarks which shocked the entire NBA fraternity. Commissioner Adam Silver - relatively new in his office - is now expected to announce findings of a probe which could define the sport.

NBA commissioner Adam Silver will only have been 88 days on the job on Tuesday when he announces the findings of a race probe into the Los Angeles Clippers owner that could define the sport. 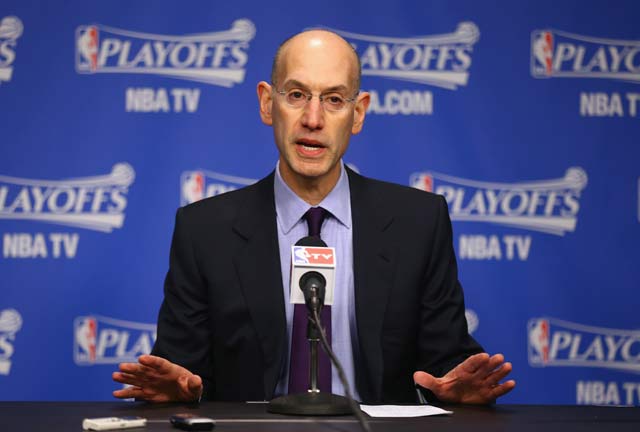 Three days after recordings of racist remarks believed to have been made by Donald Sterling were made public, and only hours before the Clippers play host to Golden State in a crucial playoff game, Silver is expected to announce sanctions against the 80-year-old billionaire. (Also read: Sponsors ready to slam-dunk Los Angeles Clippers)

"Donald Sterling should be afforded due process just as any player in this league or executive in this league," Silver said Saturday. "It would be unwise of me and improper to express a view as to what the outcome of any investigation would take us too." (Related: Race remarks haunt Los Angeles Clippers ahead of playoff game)

Silver, who took over February 1 from 30-year league boss David Stern, is facing pressure from within the game and beyond to hit Sterling with the strongest punishment possible, but any push to force Sterling to sell the team he bought for $12 million in 1981 -- and which Forbes magazine now values at $575 million -- is sure to face a protracted legal fight.

Sterling, a real-estate tycoon, purportedly said in the recordings he didn't want black people at his games or on his much-younger girlfriend's Instagram page, prompting outrage from past and current NBA stars, as well as fans of the sport -- among them President Barack Obama.

So what can Silver do?

While the league constitution remains confidential, some options are known.

Silver can force Sterling to confirm whether or not it was his voice on the recordings, although a timetable on that could be lengthy because voice analysis methods would be complicated and time consuming.

Silver can issue a lifetime ban and fine for misconduct, or suspend Silver indefinitely and impose a $1 million fine for making a statement against the best interests of the game, which racist remarks clearly would cover.

While the easiest case to make, that would fall far short of expelling Sterling from the league altogether, as some critics are demanding. It would though at least remove Sterling from a decision-making role with the team in the short term and buy time for tougher alternatives in the coming months.

That could put the onus on Sterling's fellow NBA owners.

Sterling's possession of the Clippers would be terminated with a 75 percent approval vote from owners of the league's other 29 clubs, likely invoking a rule regarding adversely affecting the NBA by failing to conduct business in an ethical or reasonable manner.

But making a move to yank the team from Sterling would likely lead to a bitter and protracted court battle, where the league might be called on to prove the team made racist business decisions beyond the alleged racist opinions of its owner.

Sterling's growing number of opponents will be hoping that the mere threat of punishment, as well as mounting outrage over the remarks, could be enough to prompt the NBA's longest-serving owner to sell up.

The NBA's worst-performing team this season, the Milwaukee Bucks, were recently sold for $550 million, so a huge profit would be lined up for Sterling.

A league praised for diversity in February as Jason Collins became the NBA's first openly gay player would want to quickly distance itself from Sterling, if it is proved he made the comments.

As Sacramento Kings owner Vivek Ranadive, the NBA's first India-born owner, said on Twitter: "If TMZ recording is true, we must have zero tolerance."

But the murky episode is complicated by the Clippers' continued involvement in the playoffs, while there is also a separate lawsuit between Sterling's estranged wife Rochelle and V. Stiviano, the girlfriend purportedly heard on the recordings.

And in another twist, if Sterling is removed from a day-to-day role with the team, it might be his wife who takes control.

In terms of precedent, the most similar case in US sports involved former Cincinnati Reds majority owner Marge Schott, who was repeatedly fined and suspended by Major League Baseball.

She was suspended for life in 1996 after stating support for Adolf Hitler and sold the Reds in 1999.