Among other games, Philadelphia's Tony Wroten led the Sixers to an overtime win over Houston, Minnesota had a comfortable win over Cleveland, and Tony Parker guided San Antonio to victory over Washington. 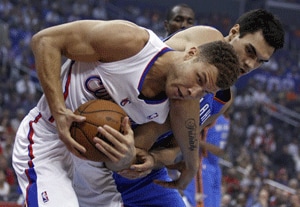 Los Angeles' Blake Griffin had 22 points and 12 rebounds after being involved in a first-half scuffle that resulted in two ejections, sparking the Clippers to a 111-103 victory over Oklahoma City Thunder on Wednesday.

Among other games, Philadelphia's Tony Wroten led the Sixers to an overtime win over Houston, Minnesota had a comfortable win over Cleveland, and Tony Parker guided San Antonio to victory over Washington.

In L.A., Serge Ibaka of the Thunder and Matt Barnes of the Clippers were ejected, and Griffin received a technical foul for his part in the altercation with 6 seconds left in the second quarter.

Kevin Durant had 33 points, making 15 of 17 free throws, and 10 assists to lead Oklahoma City, which had won four straight.

Jamal Crawford scored 20 points off the bench for the Clippers, who had six players in double figures while winning their third in a row.

Philadelphia's Tony Wroten had his first career triple-double to steer the 76ers to a 123-117 win over Houston.

James Anderson scored a career-high 36 points and Spencer Hawes made the go-ahead basket with 34 seconds left in overtime.

Ricky Rubio added 16 points and a career-high 16 assists for the Timberwolves, who outscored Cleveland 29-6 in transition points.

Kyrie Irving scored 20 points on 8-for-17 shooting and survived a nasty collision in the first quarter for the Cavaliers, who are 0-6 away from home.

Boris Diaw had 15 points for the Spurs, who held a double-digit lead for most of the game and remained undefeated at home.

Martell Webster had 21 points for the Wizards, who have lost their past three.

New York's Carmelo Anthony continued his success against Atlanta by scoring 25 points as the Knicks recovered from blowing a 17-point lead and beat Atlanta 95-91.

The Knicks, relying on 3-pointers, led 47-30 in the second period but made only 5 of 25 shots from the field while being outscored 23-10 in the third period.

Andrea Bargnani had 20 points and 11 rebounds for New York.

Toronto's Rudy Gay scored 23 points in his return to Memphis, helping the Raptors down Memphis 103-87.

Gay, who spent his first 6-plus years in the NBA with Memphis, was 8 of 18 from the field.

Kyle Lowry added 21 for the Raptors.

Charlotte's Al Jefferson had 22 points and 11 rebounds to lead the Bobcats over Boston 89-83, snapping the Celtics' four-game winning streak.

Orlando's Arron Afflalo scored a career-high 36 points as the Magic rallied to beat Milwaukee 94-91 and end a three-game skid.

Sacramento's Marcus Thornton scored a season-high 24 points after losing his starting spot, and the Kings snapped a five-game losing run by beating Brooklyn 107-86.

Utah finally brought up its first win over the season - ending their worst start in 39 years - by coming from 16 points down to beat New Orleands 111-105, with Gordon Hayward finishing with 27 points and 10 assists.

Portland's Damian Lillard hit a layup with 6.5 seconds left to give the Trail Blazers a 90-89 victory over Phoenix.

Comments
Topics mentioned in this article
NBA Los Angeles Clippers Blake Griffin
Get the latest Cricket news, check out the India cricket schedule, Cricket live score . Like us on Facebook or follow us on Twitter for more sports updates. You can also download the NDTV Cricket app for Android or iOS.