The Magic began the night having lost four straight overall and five in a row on the road. They won away from Orlando for the first time since last March 4 at New Orleans. 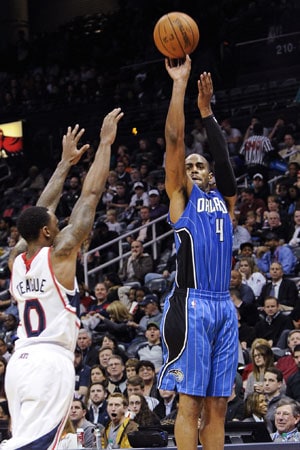 Arron Afflalo scored 26 points, and Victor Oladipo and Andrew Nicholson added 18 each as the Orlando Magic snapped a 17-game road losing streak with a 109-92 victory over the Atlanta Hawks on Tuesday.

Al Horford and Jeff Teague each finished with 15 points for the Hawks, who lost consecutive games for the first time this season.

The Magic began the night having lost four straight overall and five in a row on the road. They won away from Orlando for the first time since last March 4 at New Orleans.

Nikola Vucevic grabbed 15 rebounds, Jameer Nelson had 10 assists, and the Magic got a combined 30 points from Nicholson and E'Twaun Moore off the bench.

Washington's John Wall stayed hot with 31 points and nine assists, and Nene had a career high 30 as the Wizards downed Los Angeles 116-111 to break the Lakers' three-game winning streak.

Wall scored more than 30 points for the third straight game for the first time in his career, with his 13 fourth-quarter points coming in the final 4:40 to help Washington hold off Los Angeles. Wall was 10 for 18 from the field and made 11 of 12 free throws.

Nene surpassed his previous career best by two points on 13-for-22 shooting from the field. Martell Webster added 20 points with four 3-pointers.

Jordan Farmar led the Lakers with 22 and Pau Gasol had 17.

At Toronto, Andray Blatche scored 24 points and Joe Johnson had 21 as the Brooklyn Nets ended a five-game losing streak by beating the Raptors 102-100.

Paul Pierce scored 16 points and Kevin Garnett had 12 as the Nets won for the first time since beating Phoenix on Nov. 15.

DeMar DeRozan scored 27 points and Kyle Lowry had 21 for the Raptors, who lost a two-game winning streak.

Eric Gordon had a chance to win it for New Orleans with an open 3-pointer from the left corner in the final seconds, but the shot rimmed out and Anthony Davis couldn't quite reach the rebound.

Ryan Anderson had 21 points and 12 rebounds for New Orleans. Davis finished with 14 points and 11 rebounds.

Comments
Topics mentioned in this article
Atlanta Hawks Dwight Howard Arron Afflalo NBA Orlando Magic
Get the latest Cricket news, check out the India cricket schedule, Cricket live score . Like us on Facebook or follow us on Twitter for more sports updates. You can also download the NDTV Cricket app for Android or iOS.