Oklahoma City Thunder's 12-game winning streak was ended on Thursday by the Minnesota Timberwolves, who were guided to a 99-93 victory by J.J. Barea, who scored 14 of his 18 points in the fourth quarter. 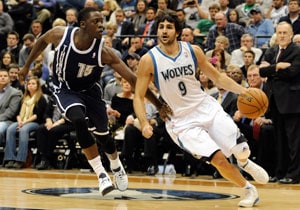 Oklahoma City Thunder's 12-game winning streak was ended on Thursday by the Minnesota Timberwolves, who were guided to a 99-93 victory by J.J. Barea, who scored 14 of his 18 points in the fourth quarter.

In Thursday's other games, the Miami Heat closed within a game of the Eastern Conference lead with a win over Dallas while Portland defeated Denver.

Minnesota's Kevin Love had 28 points, 11 rebounds and seven assists, but it was Barea who was the key, scoring 12 straight at one point for the Wolves to hold off the team with the best record in the NBA.

Oklahoma City's Kevin Durant had 33 points, seven rebounds and six assists but could not prevent the Thunder suffering their first loss since Nov. 23.

Miami cruised to a 110-95 win over the injury-riddled Dallas Mavericks, with LeBron James scoring 24 points.

Dwyane Wade had 19 points and six assists for Miami while rookie Jae Crowder had 15 points to lead six Dallas players in double figures.

J.J. Hickson had 18 points and 18 rebounds for his sixth straight double-double, while Nicolas Batum had 22 points as the Blazers made light of the absence of injured forward LaMarcus Aldridge.

The Nuggets were 0 for 22 from 3-point range, breaking the NBA record of 20 misses set by the Trail Blazers in a game against Toronto last week.

Comments
Topics mentioned in this article
NBA Minnesota Timberwolves
Get the latest Cricket news, check out the India cricket schedule, Cricket live score . Like us on Facebook or follow us on Twitter for more sports updates. You can also download the NDTV Cricket app for Android or iOS.