Miami Heat eliminated the Indiana Pacers for the third straight year with a 117-92 romp in Game 6 of the East championship series to make the NBA finals.

The Miami Heat became the third franchise in NBA history to reach the title series in four consecutive seasons, a rout of a conference-title finale getting them there again Friday night. LeBron James and Chris Bosh each scored 25 points, and Miami eliminated the Pacers for the third straight year with a 117-92 romp in Game 6 of the East championship series. 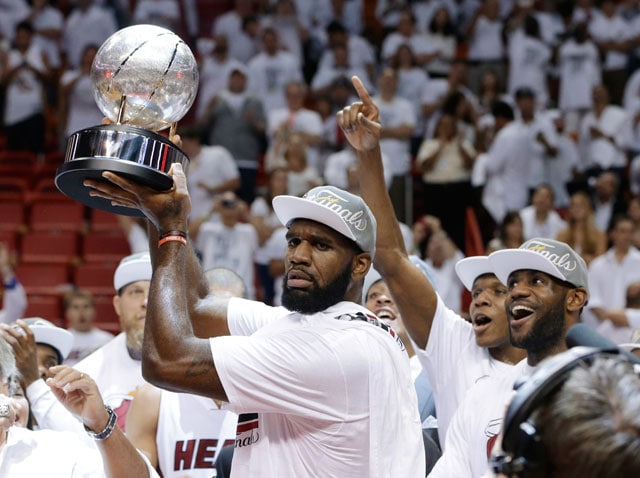 Dwyane Wade and Rashard Lewis each scored 13 points for Miami, which trailed 9-2 before ripping off 54 of the next 75 points to erase any doubt by halftime. The Heat set a franchise record with their 11th straight home postseason win, going back to the final two games of last season's NBA Finals, leading by 37 at one point.

Indiana led the East for much of the regular season, one where the Pacers were fueled by the memory of losing Game 7 of the East finals in Miami a year ago. So they spent this season with a clear goal: Toppling Miami as kings of the East.

The Pacers were two games better in the regular season.

They were two games worse in the postseason. Game 7, this time, would have been in Indianapolis. The Pacers just had no shot of making it happen, not on this night.

Until Friday, the Celtics and Lakers were the only teams in NBA history to reach the Finals in four straight years. The Heat have joined them, and their quest for a third straight title starts in either San Antonio or Oklahoma City on Thursday night.

The way they played in Game 6 made a prophet out of Bosh, who predicted Miami would play its best game of the season. The numbers suggested he was right, and then some.

Miami's largest lead at any point this season, before Game 6, was 36 points. Indiana's largest deficit of the season had been 35 points.

There were the now-requisite Lance Stephenson events, adding intrigue to the first half. The Pacers' guard walked over to James and tapped him in the face in the opening minutes, stood over him after both got tangled under the basket, and got whistled for a flagrant foul for striking Norris Cole in the head in the second quarter.

It was the end of a memorable series for Stephenson, none of which really had anything to do with basketball. His string of newsworthy moments from these East finals started when he talked about the health of Wade's knees before the series and reached an apex in Game 5 when he blew into James' ear and walked into a Heat huddle.

The Heat were bothered by it all, but got the last laugh. Big Brother, again, reigned supreme in this rivalry. And when it was over, Stephenson went out and shook hands with plenty of Heat players, as did the rest of his teammates.

Pacers coach Frank Vogel was using the big brother-little brother analogy earlier in the series, telling the tale of how at some point in every sibling rivalry the younger one has to make a stand.

Indiana thought it would happen now.

The Heat, obviously, had other ideas.