The Miami Heat warmed up for a Christmas Day blockbuster by beating the Utah Jazz 105-89 on Saturday, with LeBron James scoring 30 points. 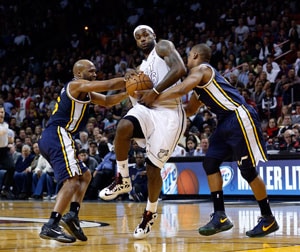 The Miami Heat warmed up for a Christmas Day blockbuster by beating the Utah Jazz 105-89 on Saturday, with LeBron James scoring 30 points.

The Heat's next game is on Christmas Day against the Oklahoma City Thunder in a reprise of last year's NBA finals series.

Elsewhere on Saturday, the Memphis Grizzlies were convincingly beaten by the Houston Rockets, the Los Angeles Lakers edged the Golden State Warriors in overtime and the Atlanta Hawks were too good for the Chicago Bulls in a clash of Eastern Conference heavyweights.

Miami's James has scored at least 20 points in all 24 Heat games this season, matching the longest run of 20-or-more efforts to start a campaign since Karl Malone did it for Utah in 1989-90.

Dwyane Wade added 21 points and seven assists as the Heat rode the strength of a big third quarter to beat Utah, going on a 22-6 run to open the second half.

Marvin Williams scored 16 for Utah, which played the second half without Mo Williams, who appeared to hurt his right thumb.

The Memphis Grizzlies slipped half a game behind San Antonio in the Southwest Division - despite having a better winning percentage, owing to the peculiarities of the standings - after a 121-96 loss at Houston.

The Grizzlies entered the game allowing an NBA-low 89.2 points a game. But they had no answer for James Harden, who scored all of his 31 points in the first three quarters and reached at least 20 points for an eighth straight game. Jeremy Lin added 15 points and 11 assists.

Houston used a big run midway through the second quarter to take the lead, and didn't trail after the break, winning their 13th straight home game against Memphis.

Mike Conley had 16 points for the Grizzlies on a night when leading scorer Rudy Gay finished with a season-low six points.

The Lakers came from 14 points down in the fourth quarter to force overtime and beat the Warriors 118-115.

Kobe Bryant had 34 points and 10 rebounds, while Steve Nash finished with 12 points and nine assists in his first game in almost two months.

The 38-year-old Nash came back from 24 games out with a small fracture in his lower left leg and made only his second appearance for the Lakers. He converted a step-back shot for the final points in overtime to lift Los Angeles to its fourth straight victory.

Jarrett Jack scored 29 points in a disappointing collapse for Golden State, which had won 11 of 14 games to get off to its best start in 20 years.

Atlanta had a surprisingly comfortable 92-75 home win over Central Division-leading Chicago, moving further clear of the Bulls in the Eastern Conference standings.

Luol Deng paced Chicago with 11 points, but the Bulls couldn't build on a victory over the Knicks in New York on Friday.

The Portland Trail Blazers notched a fifth-straight win for the first time in two seasons by beating the Phoenix Suns 96-93.

Portland's J.J. Hickson had 19 points and 15 rebounds for his seventh straight double-double, while rookie Damian Lillard had 25 points, including 18 in the second half.

The Suns led by 12 points in the first half, but saw their run of four straight wins ended.

The Denver Nuggets inflicted a 15th successive loss on Charlotte, beating the Bobcats 110-88.

Kosta Koufos scored a season-high 16 points, and Kenneth Faried and Andre Iguodala added 15 points apiece as the Nuggets won at home for the sixth straight time.

The Indiana Pacers overcame a 22-point deficit to down New Orleans 81-75, handing the Hornets an 11th successive defeat. It is the team's longest losing skid in 18 years.

David West scored 20 of his 25 points in the second half while Paul George had 20 for Indiana, which has won seven of eight.

The Cleveland Cavaliers were one team capable of ending a losing spiral, beating the Milwaukee Bucks 94-82 after losing their previous six. The Cavs had also lost nine in a row against Milwaukee.

In Saturday's other game, the Detroit Pistons defeated the Washington Wizards 96-87.

Comments
Topics mentioned in this article
C.J. Miles Los Angeles Lakers Utah Jazz Al Jefferson Gordon Hayward Cleveland Cavaliers NBA
Get the latest updates on ICC T20 Worldcup 2022, check out the Schedule and Live Score. Like us on Facebook or follow us on Twitter for more sports updates. You can also download the NDTV Cricket app for Android or iOS.