LeBron James, who was named playoff Most Valuable Player for the second year in a row, also nailed five 3-pointers and had four assists for the Heat, who won a third title to go with crowns in 2012 and 2006. 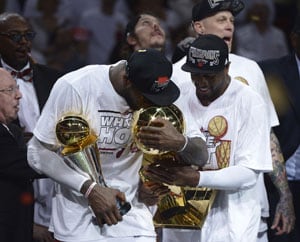 James, who was named playoff Most Valuable Player for the second year in a row, also nailed five 3-pointers and had four assists for the Heat, who won a third title to go with crowns in 2012 and 2006.

Dwyane Wade added 23 points and 10 rebounds and Shane Battier came off the bench to score 18 points on 6-of-8 shooting from beyond the arc for the Heat, the first team to win back-to-back titles since the Los Angeles Lakers in 2009 and 2010.

James earned his second championship ring for the Heat, who posted a league-best 66-16 regular-season record that included a 27-game winning streak, the second longest in league history.

It was a heartbreaking defeat for the Spurs and their first loss in five trips to the best-of-seven championship final.

San Antonio was just seconds from winning the NBA crown in game six but the Spurs blew a five-point lead late in regulation and then lost in overtime to set up the deciding game.

James drained a key 19-foot jump shot with 28 seconds remaining Thursday after a Tim Duncan miss at the other end to give the Heat a 92-88 lead.

James then stole the ball from the Spurs' Manu Ginobili and helped seal the victory with two free throws with 23 seconds to play, giving Miami a 94-88 lead.

Wade and James combined for 60 of the Heat's 95 points as Wade capped the scoring Thursday by making a free throw with 16 seconds remaining.

Duncan had 24 points and 12 rebounds and Kawhi Leonard finished with 19 points and 16 rebounds for the Spurs, who were trying to become the first team since 1978 to win a seventh game of the NBA Finals on the road.

Both teams shot poorly in the first half, especially the Spurs who hit just 35 percent from the field. The Heat had eight turnovers and shot just 5-of-14 from beyond the arc in the first two quarters.

James and Wade combined to score 21 of the Heat's final 28 points in the second quarter.

Wade got hot from the opening tip and carried it into the second quarter. He scored 14 points on 7-of-12 shooting and had six rebounds as Miami took a 46-44 lead at half-time.

Duncan had 13 points while Ginobili scored seven in the first half for the Spurs.

James hit back-to-back 3-pointers late in the third quarter to give Miami one of their biggest leads to that point at 62-57. James finished a superb 5-of-10 from beyond the arc in game seven.

Battier and Mario Chalmers both sank 3-pointers in the final minute of the third to give the Heat a 72-71 lead heading into the fourth.

Ginobili and Gary Neal answered those 3-pointers with alternating baskets of their own to keep San Antonio within striking distance.

The Spurs made the Heat work for the victory as every time Miami looked ready to make a run, the Spurs would battle back to keep the game close into the final minutes of regulation time.