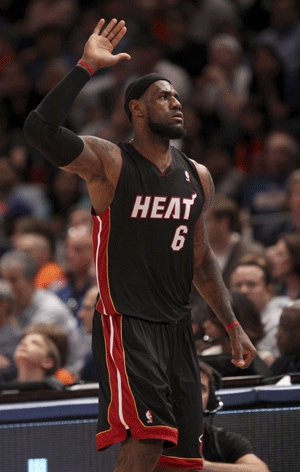 Originally scheduled to be here in November, the Heat's lone regular-season game in New York came with the compressed regular season coming to a close - and with a chance they'll be back again soon.

"This is obviously a lot of our favorite places to play, but I think it came at a good time for us," Wade said. "We were struggling, as in to play a complete game on the road, and what better place to come in and focus then here, where this team has been playing well and can embarrass you if you don't play your game. So understanding that this could obviously be a first-round match-up as well, I thought today we came in, we didn't play amazing, but played good enough to win the game. We did a lot of good things, so it was a good time for it."

Chris Bosh finished with 16 points and 14 rebounds for the Heat, who pulled away in the fourth quarter of a possible playoff preview. Miami is second in the Eastern Conference and the Knicks came into the game tied for seventh, although they fell back behind Philadelphia after the loss.

Anthony had only two baskets in the fourth quarter, perhaps tired from playing 43 minutes and with James switching over to defend him after Anthony had overwhelmed Shane Battier. New York had its nine-game home winning streak snapped.

Anthony had the Knicks hoping he could pull out another game against a power team after scoring a season-high 43 last Sunday in overtime against Chicago. His tip-in gave New York a two-point lead with 91/2 minutes left, but by the time he had his other field goal on a 3-pointer with 1:28 remaining, Miami had opened an 11-point cushion.

JR Smith scored 16 points for the Knicks, who lost all three games against the Heat. Still without the injured Amare Stoudemire and Jeremy Lin, New York didn't have the firepower to match Miami's Big Three for 48 minutes.

Wade moved easily and shot 10 of 18 after missing the last game to rest his ankle. Miami has won two in a row after back-to-back losses last week against Boston and Chicago.

"We got some defensive stops in Chicago, but were unable to close it out," James said. "Tonight we were able to make some shots from the floor and then come back down and get some big stops."

Despite their talent, the Heat haven't measured up on the road in recent weeks, perhaps the biggest concern about them heading into the postseason. They are only 17-13 outside Miami and hadn't beaten a team with a winning record in nearly a month.

"It's all about perseverance and just continuing to stay with it," Bosh said. "We know we're a great road team, we just have to go out there and prove it night in and night out and I think we're going to do a better job and continue to play well, and hopefully this will give us some momentum."

Miami held a few nine-point leads in the third, but the Knicks cut it to three by period's end, then got a tying 3-pointer from Steve Novak to open the fourth and Landry Fields followed with a basket to put New York ahead in the opening minute.

It was close for the next six minutes before Wade and James hit jumpers after Joel Anthony tipped in a miss, a flurry of six straight points that gave Miami an 87-80 lead. The Knicks, relying on jumpers most of the game, simply couldn't hit any, and lacked much inside presence when Tyson Chandler appeared slowed by knee pain after landing awkwardly in the third quarter.

Chandler said he was hurt on a "bad collision" but expected to play Tuesday against Boston.

"I really couldn't move when I got out there," he said. "I didn't have much strength on it. Moving laterally and trying to get up on the ball screen is difficult."

The Heat were scheduled to play their season opener here in the original 82-game schedule that was scrapped because of the lockout. They also would have opened here in a revised 72-game season that never developed when owners and players couldn't agree to a new deal in time.

Instead, they ended up being the last Eastern Conference team to visit Madison Square Garden, site of many fierce playoff matchups between the teams in the late 1990s.

It had a playoff look Sunday, with orange shirts being worn by fans all around the court - though not by Jay-Z and Beyonce sitting courtside.

Only the Heat looked playoff ready at the start. The Knicks missed their first three free throws and Miami led by as much as 11 in the first quarter before settling for a 29-22 advantage that would have been much bigger if not for Anthony's 14 points.

Miami stalled in the second quarter, Wade slamming the ball to the floor in frustration after one basket as the Knicks rallied behind Anthony and their reserves before the Heat took a 46-44 edge into halftime.

"I thought early we were a little jittery because we wanted to play so well coming out of the box and we didn't. But once we got back in the game I really thought we were playing at a nice pace in that second quarter to get back in," interim coach Mike Woodson said. "In the third quarter, I thought we had nothing offensively and then coming down the stretch we just didn't get it done."

The Heat had a brief scare in the third when James went down after twisting his ankle when he backpedaled into some fans after hitting a corner jumper. He stayed down for a moment but remained in the game after a timeout.