Miami stars Dwyane Wade and LeBron James combined for 69 points to lead the Heat to a 105-93 win over the Indiana Pacers on Thursday, completing a 4-2 series win and booking a place in the NBA Eastern Conference finals. 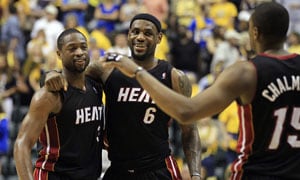 Miami stars Dwyane Wade and LeBron James combined for 69 points to lead the Heat to a 105-93 win over the Indiana Pacers on Thursday, completing a 4-2 series win and booking a place in the NBA Eastern Conference finals.

Wade scored 41 points and James had 28 to complete an extraordinary succession of games in which the pair combined to haul Miami to victories and salvage a season that looked like ending prematurely.

Indiana had led the series 2-1, with a home game to come, but then the big two - injured Chris Bosh was absent from the star trio - took over. James scored 98 points, grabbed 34 rebounds and dished out 24 assists over three games while Wade had 99 points, 22 rebounds and 11 assists.

"In the regular season, we've had some good games," Wade said. "But I don't know if we've ever had three in a row like that in the playoffs."

Next for the Heat will be a finals series against either Boston or Philadelphia, but on James and Wade's current form, Miami will be favourite to beat anyone.

"Ever since Game 3, they've played at such a high level," Indiana coach Frank Vogel said. "I don't know if anybody can beat them."

The Heat rallied from an early 11-point deficit, riding the hot hand of Wade in the opening half. He scored 26 points by the break, tying Tim Hardaway's 16-year-old franchise record for most playoff points in the first two quarters. James hit consecutive baskets with just over a minute remaining to close it out.

"We understand that when Chris (Bosh) went out, we had to step up," Wade said. "The team looked to us to lead."

The Heat will get a chance to relax for a couple of days before worrying about the next opponent, which will be determined in Game 7 at Boston on Saturday.

Bosh hopes to return at some point, but it might not matter.

"Chris Bosh is an awesome basketball player, but when he goes down, that just means more touches for LeBron and Wade," Vogel said. "That's not exactly an advantage."

David West led Indiana with 24 points and all five starters were in double figures. But that balance was overwhelmed by Wade and James.

In a game of spurts, the decisive one came in the closing minutes of the third quarter.

The game was level at 66-66 but Miami closed out the quarter on a 13-3 run, capped by Mario Chalmers' buzzer-beating 3 from the corner. Wade, who was on the bench getting his customary breather at the end of the quarter, leaped from his seat as the ball left Chalmers' hand at the far end, raced along the baseline and pumped his fist when it swished.

When Chalmers raced toward the Miami bench, Wade greeted him near the free throw line with a low-five.

"We just had a bad stretch," West said. "They got us in the third quarter."

"They're too good. They capitalize on your mistakes. We were too loose with the ball. They pressure you all over the place."