The Memphis Grizzlies edged the San Antonio Spurs 101-98 in overtime on Friday to reduce the gap between the NBA Southwest Division's top teams to 1-1/2 games and record their first win over their rivals since the 2011 playoffs. 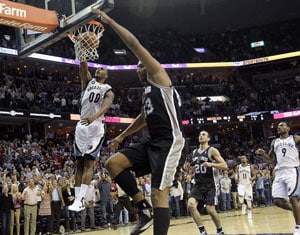 The Memphis Grizzlies edged the San Antonio Spurs 101-98 in overtime on Friday to reduce the gap between the NBA Southwest Division's top teams to 1-1/2 games and record their first win over their rivals since the 2011 playoffs.

Elsewhere, Oklahoma City moved into a tie for the overall league lead by inflicting a sixth-straight loss on the injury-riddled Los Angeles Lakers; the Chicago Bulls beat New York for the third time this season; Golden State held off fast-finishing Portland; while Boston and Atlanta also won.

Memphis' Rudy Gay hit a pull-up jumper from 14 feet with 27.8 seconds left, and finished with 23 points for the Grizzlies while Mike Conley had 21 points and five assists.

Tony Parker, who finished with 30 points for the Spurs, forced overtime, beating the buzzer with a 27-footer but San Antonio went only 1 of 10 from the floor in overtime, and Manu Ginobili missed a potential tying 3-pointer just before the buzzer.

Oklahoma City Thunder heaped misery on Los Angeles with a 116-101 win on Friday, sending the struggling Lakers to their sixth straight loss.

Kevin Durant scored 42 points while Russell Westbrook had 27 points and 10 assists for the Thunder, who romped to a 27-point lead in the second half.

Oklahoma City (28-8) matched the Clippers for the NBA's best record with a virtuoso game from Durant, who had 38 points midway through the third quarter.

Kobe Bryant scored 28 for the Lakers, but without Dwight Howard and Pau Gasol, they slumped to their first six-game skid since March 2007.

The Chicago Bulls' 108-101 win over New York represented not only their third win in the series this season but also handed the Knicks their first three-game losing streak.

Luol Deng scored a season-high 33 points, shooting 13 of 18 from the field, while Carlos Boozer added 17 points for the Bulls, whose offense won't be at full strength until Derrick Rose is back from knee surgery, yet they still shot 57 percent.

Carmelo Anthony ended up with 39 points for the Knicks.

The Golden State Warriors led Portland by 20 points in the second half before the visiting Trail Blazers roared back, and the hosts clung on for a 103-97 victory.

Portland rookie and Oakland native Damian Lillard nearly rallied the Blazers, scoring 17 of his career-high 37 points in the fourth quarter.

While the Blazers' comeback attempt fell just short, the Atlanta Hawks converted theirs, coming from 15 points down in the second half to beat the Utah Jazz 103-95.

Devin Harris scored a season-high 24 points for the Hawks, who took the lead for the first time with 2:44 remaining. Randy Foye had 25 points to lead Utah.

The Boston Celtics nearly blew a 17-point lead but steadied then pulled away late to beat the Houston Rockets 103-91.

Paul Pierce scored 16 of his 23 points in the second half and Kevin Garnett added 17 points and four blocks for the Celtics, who have a season-high five-straight wins.

James Harden scored 24 for Houston, which got within two points midway through the fourth quarter.

The Brooklyn Nets also have five-straight wins after downing the Phoenix Suns 99-79. Joe Johnson scored 19 points for the Nets, who have a hat trick of 20-point wins for the first time in franchise history.

The Detroit Pistons beat Milwaukee 103-87, handing the Bucks their first loss under interim coach Jim Boylan after two wins since he replaced the fired Scott Skiles. Detroit's Greg Monroe had 26 points and 11 rebounds.

The Denver Nuggets trailed most of the day against Cleveland but finished strongly to edge the Cavaliers 98-91. Danilo Gallinari scored 23 points, hitting a crucial 3-pointer in the waning seconds for Denver, which has won four straight.

In other games, the New Orleans Hornets also notched a fourth straight, beating the Minnesota Timberwolves 104-92, while the Toronto Raptors - who have won 10 of 13 after a miserable start to the season - downed the lowly Charlotte Bobcats 99-78.

Comments
Topics mentioned in this article
Rudy Gay NBA Marina Erakovic
Get the latest updates on ICC T20 Worldcup 2022 and CWG 2022 check out the Schedule, Live Score and Medals Tally. Like us on Facebook or follow us on Twitter for more sports updates. You can also download the NDTV Cricket app for Android or iOS.