The Memphis Grizzlies lost their grip on the NBA's best record, sliding to third overall after Saturday's 93-83 home defeat at the hands of the Atlanta Hawks. 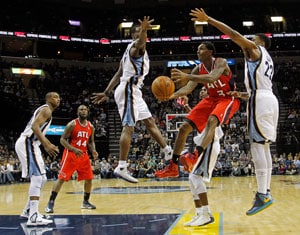 The Memphis Grizzlies lost their grip on the NBA's best record, sliding to third overall after Saturday's 93-83 home defeat at the hands of the Atlanta Hawks.

The San Antonio Spurs took over top spot with a win over Charlotte, while the New York Knicks' lead in the Eastern Conference was cut to one game after they lost at Chicago.

Atlanta's Josh Smith had 24 points while Lou Williams scored 18 of his 21 in the second half to guide the Hawks to their ninth win in 10 games. Zach Randolph and Marc Gasol scored 18 points apiece for the Grizzlies, who lost at home for only the second time this season.

Chicago's Marco Belinelli and Luol Deng scored 22 points apiece as the Bulls won 93-85 to end New York's five-game winning streak. Belinelli scored 15 points in the first quarter, while Deng had 10 in the fourth, giving the Bulls their first three-game winning streak of the season. Raymond Felton led the Knicks with 27 points but was just 9 for 30 from the field, exceeding his career high for field-goal attempts by six shots.

The Spurs moved a game ahead of idle Oklahoma City for overall top spot by routing the Charlotte Bobcats 132-102, setting a franchise record with 19 3-pointers. Danny Green was 7-of-9 from outside the arc and finished with 23 points while Tony Parker had 22 for the Spurs, who have also won nine of ten. Kemba Walker's 23 points led the Bobcats, who have lost seven straight.

The Boston Celtics moved level with Philadelphia on 11-9 records in the Atlantic Division by beating the 76ers 92-79. Kevin Garnett scored 19 points and Jeff Green added 16 for the Celtics, who had lost to Philly in a tight finish on Friday. Thaddeus Young led Philadelphia with 22 points.

The Los Angeles Clippers stayed half a game clear atop the Pacific Division by beating the Phoenix Suns 117-99. Jamal Crawford led a fourth-quarter rally by the Clippers bench with 13 of his 21 points, and Los Angeles won its fifth in a row. Blake Griffin added 24 points for L.A. Michael Beasley scored 21 points off the bench for the Suns, who have lost six straight for the first time in four seasons.

The big individual effort of the day came from Dallas' O.J. Mayo, who scored 40 points, including 10 in the last three minutes, to lift the Mavericks to a 116-109 victory over the Houston Rockets. Chris Kaman added 20 points for Dallas, whose win was due chiefly to shutting down James Harden in the second half. Harden had a remarkable 30 points in the first half but just nine in the second. Rockets coach Kevin McHale rejoined the team for the game after almost a month away from the team, and two weeks after the death of his daughter.

The Miami Heat bounced back from back-to-back defeats by downing the New Orleans Hornets 106-90. Dwyane Wade scored 26 points and LeBron James finished with 24 points and seven assists for the Heat, who took control by outscoring the Hornets 33-10 over the final 11 minutes of the first half. New Orleans started the game 10 for 12 from the floor, then shot 9 for 31 over the rest of the half. Ryan Anderson scored 24 for the Hornets.

The Golden State Warriors stayed half a game behind the Clippers by edging the Washington Wizards 101-97 and notching a third straight road win. The Sacramento Kings ended a skid of six successive road losses by beating the Portland Trail Blazers 99-80, while the Detroit Pistons won 104-97 at the Cleveland Cavaliers.

Comments
Topics mentioned in this article
NBA Marina Erakovic Atlanta Hawks
Get the latest updates on IPL 2020, check out the IPL Schedule for 2020 and Indian Premier League (IPL) Cricket live score . Like us on Facebook or follow us on Twitter for more sports updates. You can also download the NDTV Cricket app for Android or iOS.