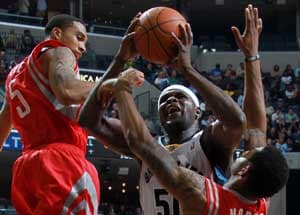 Randolph shot 11 of 14 and grabbed nine rebounds. Gasol and Rudy Gay, who finished with 10 points, each had eight boards as Memphis outrebounded the Rockets 42-33.

Six Grizzlies finished in double figures, including Jeremy Pargo's 14 and 13 by Quincy Pondexter.

Kevin Martin led the Rockets with 21 points, while Kyle Lowry had 15 points and eight assists. Rookie Chandler Parsons scored 13 points, including a trio of 3-pointers, all in the fourth quarter.

Comments
Topics mentioned in this article
NBA Marina Erakovic Zach Randolph Blake Griffin Chris Paul
Get the latest updates on IPL 2020, check out the IPL Schedule for 2020 and Indian Premier League (IPL) Cricket live score . Like us on Facebook or follow us on Twitter for more sports updates. You can also download the NDTV Cricket app for Android or iOS.