Across three NBA championships and more than 100 playoff victories together, Tim Duncan, Tony Parker and Manu Ginobili have built a bond most teammates will never share. 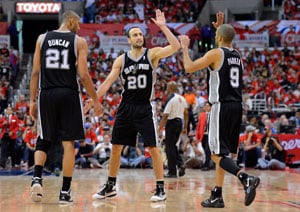 Across three NBA championships and more than 100 playoff victories together, Tim Duncan, Tony Parker and Manu Ginobili have built a bond most teammates will never share.

So maybe Ginobili could ignore it when he was suddenly being criticized around San Antonio.

You better believe it bothered the others.

"Yeah, of course," Parker said. "Because for everything he did for the franchise, I thought it was a little bit too harsh. We understand it's a business. He came out big tonight."

Ginobili broke out of a slump in a big way with 24 points and 10 assists in his first start of the season, and the Spurs beat the Miami Heat 114-104 on Sunday night to take a 3-2 lead in the NBA Finals.

Parker scored 26 points, Duncan had 17 points and 12 rebounds, and Ginobili had his highest-scoring game of the season as the Spurs became the first team to shoot 60 percent in a finals game in four years.

"He's such a huge part of what we do and how far we've come. You can see it tonight in how we played and the results of the game," Duncan said. "We're always confident in him. ... We know he has it in him. We hope he can bring it forward for one more win."

Danny Green smashed the NBA Finals record for 3-pointers, hitting six more and scoring 24 points. Kawhi Leonard finished with 16, but the stage was set when Ginobili trotted out with Duncan, Parker and the rest of starters in what could have been the last finals home game for a trio that's meant so much to San Antonio.

One more victory and the Spurs' Big Three, not Miami's, will be the one that rules the NBA.

And a big reason was Ginobili, as he's been for so long - just not during what had been a miserable series for the former Sixth Man of the Year.

On Sunday, it was all forgotten.

"He's obviously very popular. He's been here a long time. He's helped us have a lot of success over the years," Spurs coach Gregg Popovich said.

LeBron James and Dwyane Wade each scored 25 points for the Heat, who host Game 6 on Tuesday night. They need a victory to force the first Game 7 in the finals since the Lakers beat the Celtics in 2010.

Miami's Big Three formed a few weeks after that game, with predictions of multiple titles to follow. Now they're a loss away from going just 1 for 3 in finals to start their partnership, while the Spurs could run their perfect record to 5 for 5.

"This is the position we're in and the most important game is Game 6," James said. "We can't worry about a Game 7, we have to worry about Game 6."

Duncan won his first title in 1999, and Parker and Ginobili were with him for three championships since. They have been the perfect partnership, keeping the Spurs in the hunt virtually every year while teams such as the Lakers, Mavericks and Suns have all risen and fallen in the Western Conference during that time.

They remained unbeaten in Game 5s, including two previous victories when the series was tied at 2-2. Of the 27 times the finals have been tied at 2-2, the Game 5 winner has won 20 of them.

Miami was the most recent loser, falling to Dallas in Game 5 in 2011 before being eliminated at home the next game.

"We're going to see if we're a better ballclub and if we're better prepared for this moment," Wade said.

"They just absolutely outplayed us," Heat coach Erik Spoelstra said. "At times they were just picking one guy out at a time and going at us mano y mano. That will change."

Ray Allen scored 21 points on the night for the Heat as he watched Green shatter his finals 3-point record. Green has 25 3s in the series. Allen made 22 3-pointers in six games in the 2008 finals for Boston.

Chris Bosh scored 16 points for Miami, Wade had 10 assists, and James had eight assists and six rebounds, but it was their defense that let the Heat down in this one.

The Heat were within one with 3:05 left in the third quarter before Green hit yet another 3-pointer and Ginobili followed with the stretch that turned the game into the fourth straight blowout of the finals.

The crafty lefty plays with a flair developed on the courts of Argentina and perfected in Europe before coming to the NBA. He sees angles other players can't and takes risks few others would, but his style has been the perfect fit alongside Duncan and Parker.

He converted a three-point play, tossed in a floater with his left hand as he drifted right, and found Tiago Splitter under the hoop with a pass to make it 85-74.

He flipped in another runner with 2.9 seconds to go in the period, sending the Spurs to the fourth with an 87-75 lead as fans chanted "Manu! Manu!" during the break between the third and fourth quarters.

Ginobili had been averaging just 7.5 points on 34.5 percent shooting in the series, making only three of his 16 3-point attempts. But Popovich made the finals' second lineup change in two games, after the Heat inserted Mike Miller to start Game 4.

Ginobili didn't make a start this season and certainly hadn't been playing like someone who belonged with the first five. But in the Spurs' biggest game of the season, they remained confident he would break out, and they were right.

"I knew that I was not scoring much and I felt it in the air. But I tried not to care about it. I know I'm critical enough of myself to be worrying about what other people say," Ginobili said.

It was the first time he scored 24 or more points since having 34 on June 4, 2012, against Oklahoma City, according to STATS.

The AT&T Center crowd roared when Ginobili was the last starter announced, the cheers growing louder when he made a jumper - originally ruled a 3-pointer but later overturned by replay - on the first possession. He assisted on the Spurs' next three baskets, and it was 15-10 when he later hit a 3 that did count.

Parker picked it up from there, dancing his way into the lane repeatedly and scoring seven points in a 12-0 run that made it 29-17.

Green's third straight 3-pointer made it 45-28 about 5 minutes into the second quarter, and it seemed the trend of blowouts would continue.

But James suddenly got rolling during a 14-2 Miami spurt that cut it to five on his third consecutive Heat basket.

Miami then ran off eight in a row to start the second half and get within one. They cut it to one again later in the period before Ginobili led the flurry that finished the Heat for good.

It was a fitting finish if it was the last home game in the finals for San Antonio's star trio, which has combined for 101 playoff victories. Ginobili has said he might think about retirement as he turns 36 next month, and Duncan is 37.

Both coaches said it was difficult waiting two days between games - Popovich said it was "like death" - though he did say it was great for the Spurs because they have some older players.

The break seemed to help his team early, particularly Parker, whose energy sagged in the second half of Game 4 as he struggled with a strained hamstring that he said could tear at any time and would've had him sidelined during the regular season.

If things fall right for the Spurs, he'll have plenty of time to heal after Tuesday.